Great Fishing Today on the All Day Trip 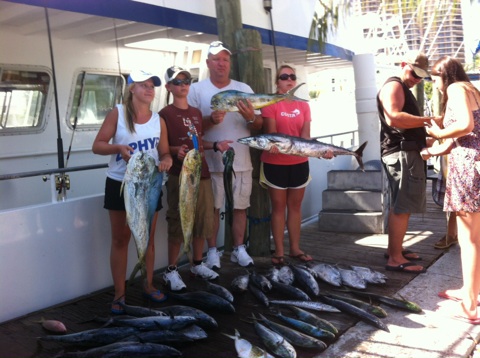 Great fishing today on the All Day Trip aboard the Mary B III.  We heard there were some dolphin offshore, so we ventured out about 5 miles offshore.  Trolling around out there, we found a nice weedline formed.  We started getting bites right away… 1 dolphin, then 2 more, etc.  The dolphin were hitting pretty steady for a couple hours.  We caught 4 wahoo mixed in the catch as well.  One we got into the heat of the afternoon, the dolphin slowed down.  Capt. Kevin decided to come into 300ft of water and do some deep dropping.  We deep dropped with chicken rigs and caught another 20+ tilefish before we had to call it a day.  The fishing action was excellent, hardly any down time at all without fish on the end of the line.  This is a great time of year to fish the All Day Trip because the dolphin are moving through and with 8 hours to fish, we have time to go out that far and troll around for them.  The wahoos we caught were just awesome too.  All the wahoo bit on the deep planer baits. 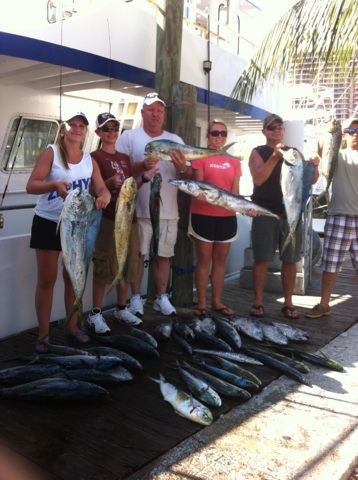 The past couple weeks has been good action on all our trips.  The daily deep sea drift fishing trips are catching bonitos, kingfish, snapper and grouper.  Kingfish are starting to bite better and better this time of year.  On our sportfishing charters, we’re also getting good action on bonitos and kingfish, but we also have been getting some sailfish, wahoo and blackfin tunas.  Some monster sharks are biting out there too, and our crew on the Out of the Blue specialize in shark fishing charters.  We’re closing in on the end of the summer fishing season, so the bonitos are slowing down.  But the action on kingfish is improving, mahi-mahi dolphin are biting offshore, wahoos and sailfish are around and there is plenty of action to be had bottom fishing.  Good luck to everyone fishing out there this week.  I’ll sea ya on the water! 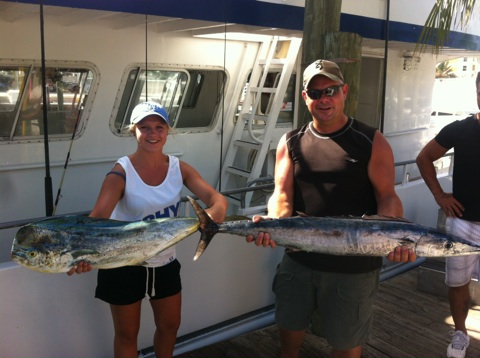 Dolphin and wahoo caught by this father and daughter fishing team 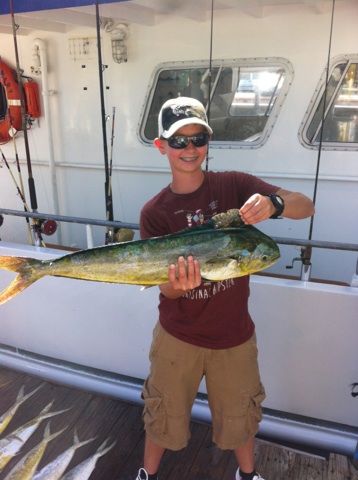 That's the look of a happy angler! Nice dolphin caught on the 8 hour trip.