Great catch of bonitos and kingfish on our drift fishing trip aboard the Catch My Drift.

The action is astounding on our fishing trips this week.  The bonito run in full force as they charge through our waters in tremendous numbers.  Bonitos are in the same family of fish as tuna and they have all their same traits of aggressiveness, super strength and frenzied feeding.    The sheer number of bonitos that we catch this month and next is staggering.  Kingfish are snapping also.  They are mixed in with the bonitos.  Kings swim in the same waters and feed on the same diet that bonitos do.  Blackfin tunas are also biting good these days and are the third most prevalent fish on the reefs.  All 3 legs of that tripod are making up the majority of our catches this month and are providing great action on our Ft Lauderdale fishing charters.

Nice kingfish caught by this fisher gal on our sportfishing trip.

The action is on fire on the reefs and those aren’t the only fish biting.  A few big wahoo have hit the docks too.  Wahoo are a summertime fish and act just like a bonito when on the line.  You never know if you’ve hooked a big wahoo or a big bomber bonito until you get the fish up close to the boat.  Every now and then, you see those stripes and the adrenaline pumps and you’ve got a wahoo behind the boat!  Wahoo are famous for shaking the hooks right behind the transom of the boat.  That’s what makes them so awesome to catch, the rarity and the difficulty to successfully land them.

Nice wahoo caught fishing aboard the Mary B III on a sportfishing charter.

Sailfish are another less abundant fish on the reefs this time of year but still a possible catch.  Sails are one of the most sought after fish in the ocean and one of the biggest fish we catch fishing in Fort Lauderdale.  They are called the ballerina of the sea because of the spectacular jumping displays they put on.  Sailfish always grab the surface lures.  They come up and bat the bait using their bill.  It often takes them 10-12 attempts at coming up and whacking at the bait before they get it down their mouths.  As soon as you come tight on them, they come up jumping.  It’s one of the most exciting moments in sportfishing when you get your first sailfish on the line, jumping behind the boat. We don’t catch sailfish every day, but when we do it sure is exciting.

Big sailfish caught trolling the reef on our sportfishing charter out of Fort Lauderdale.

Barracudas are a top predator of the reef and they too come through this month.  There’s nothing out there a barracuda can’t eat.  Their razor sharp teeth can cut through anything, so a 5 pound barracuda can take a big chunk out of a 50 pound fish.  What happens a lot this time of year is that you are fighting a bonito to the boat and a barracuda comes up and bites the tail off your bonito on the way in.  Get your fish into the boat quick! 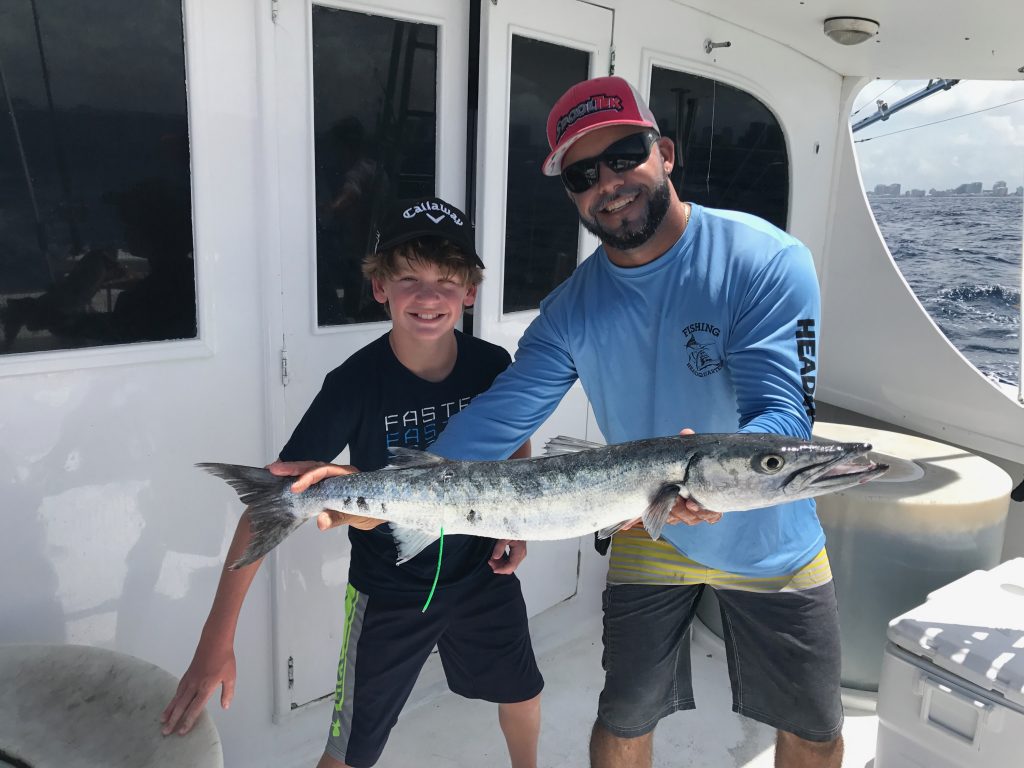 Some mahi-mahi are offshore if you go looking for them.  It helps to go out on a 6 or an 8 hour charter, so you have ample time to go offshore and plenty of time to troll around looking for fish.  With the summertime dolphin bite, it’s all about covering a lot of ground with your lures out and following weedlines, chasing birds and looking for floating debris.  The great thing about summertime mahi-mahi fishing is that when you do find that school of mahi after trolling for them for so long, it’s usually a big school of them and you can load the box.  Dolphin fishing is often described as hours and hours of boredom, interrupted by a moment of panic.  The dolphin of the summer are generally schoolie sized fish, 3-4 pounders. 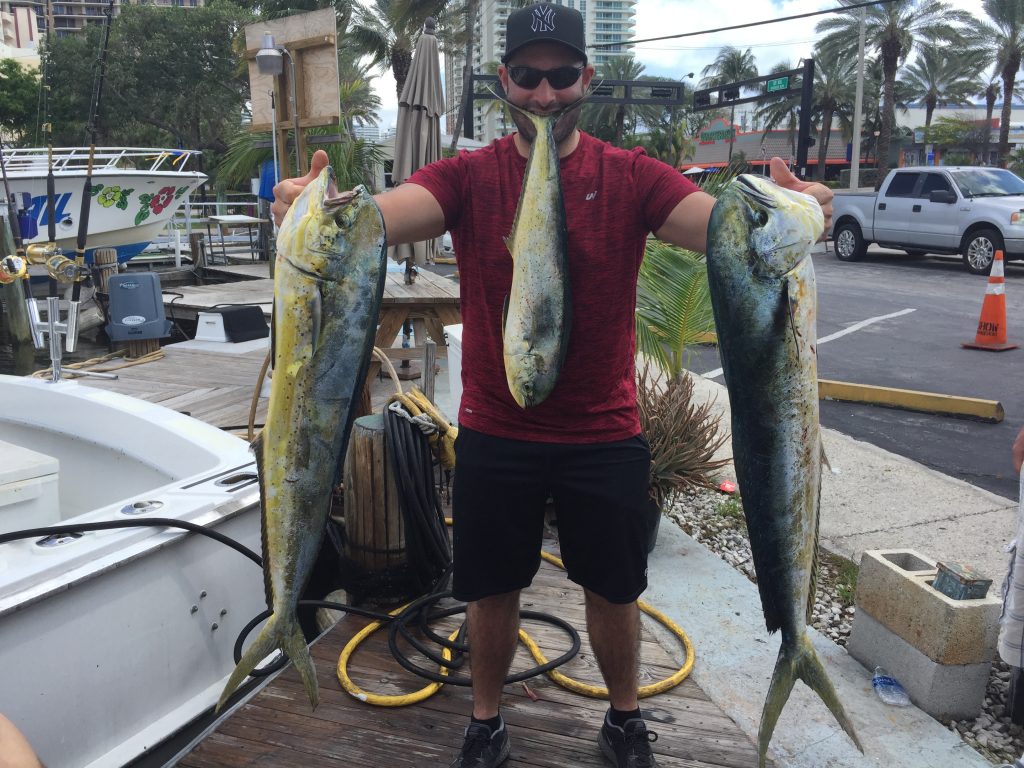 A few nice dolphin caught on our sportfishing charter.

Sharks are the kings out there and along with all the commotion happening on the reefs with the big runs of bonitos, come the sharks.  Bull sharks and dusky sharks are biting best right now, but you never know what kind of big game shark you might catch when soaking a couple big shark baits out in 200-300 feet of water.  We caught a huge tiger shark a week ago that must have weighed over 500 pounds.  There are some massive sharks biting in July and August in south Florida. 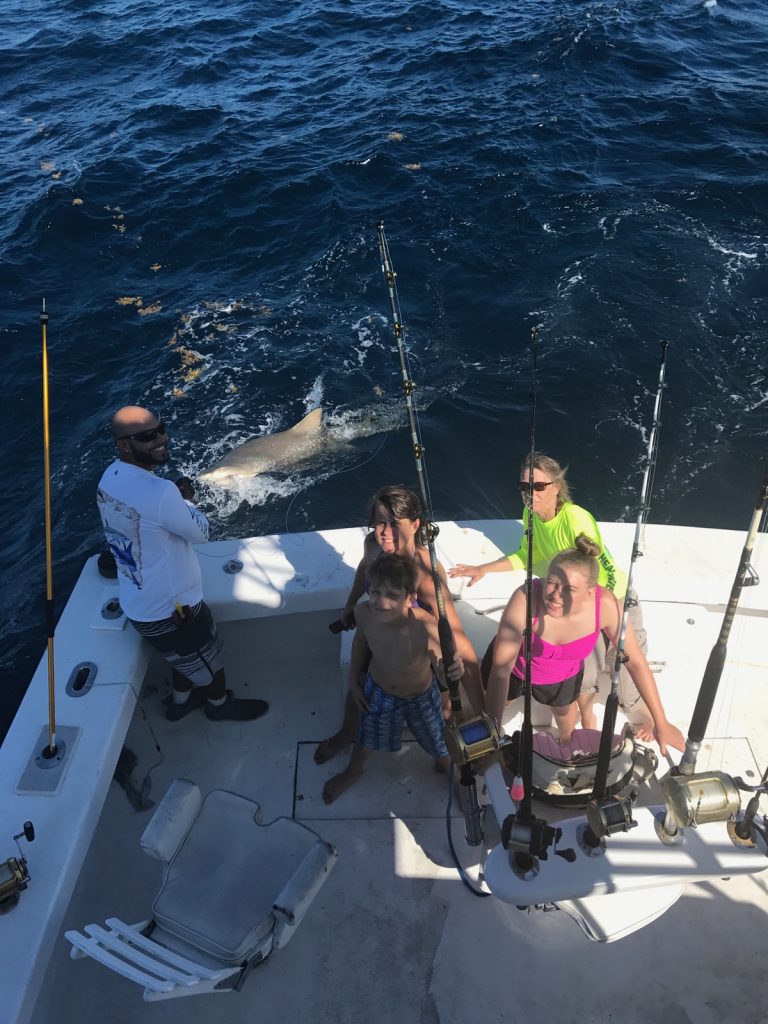 Summer is one of my favorite times of year.  The action is great so everyone usually catches fish and they are bigger fish at that.  In the summer months, the bonitos bite better in the mornings and the tunas and mahi-mahi usually bite better in the afternoons.  Good luck to everyone fishing out there this month.  I’ll sea ya on the water. 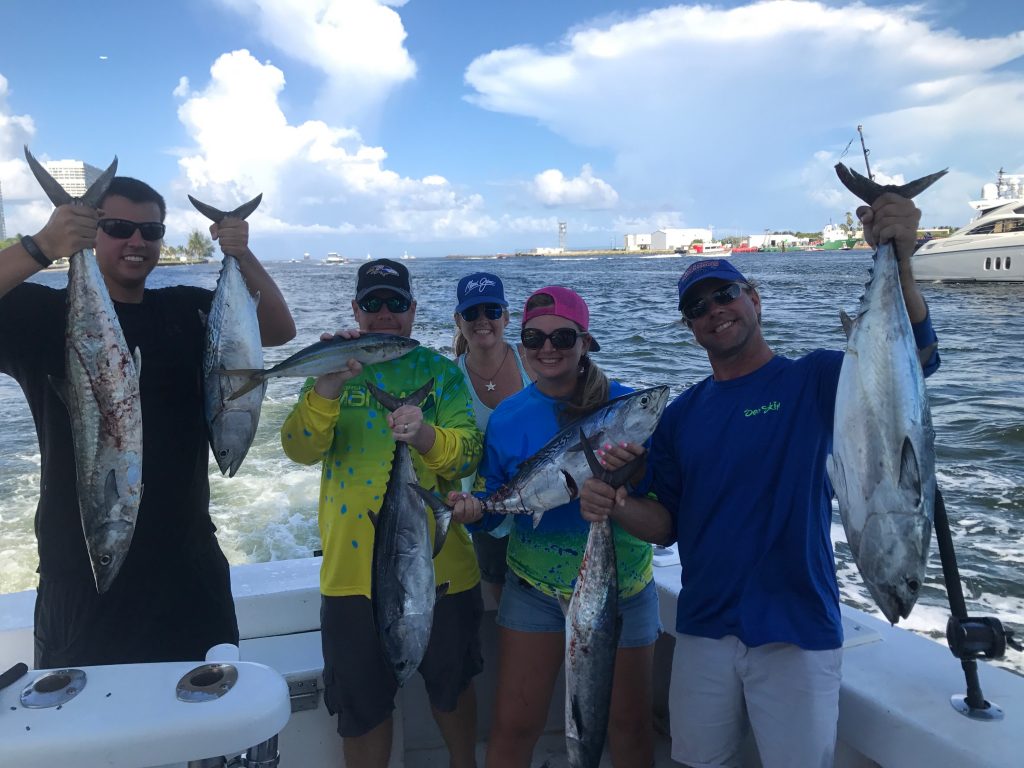 Nice catch of bonitos, kingfish and tuna on our sportfishing charter 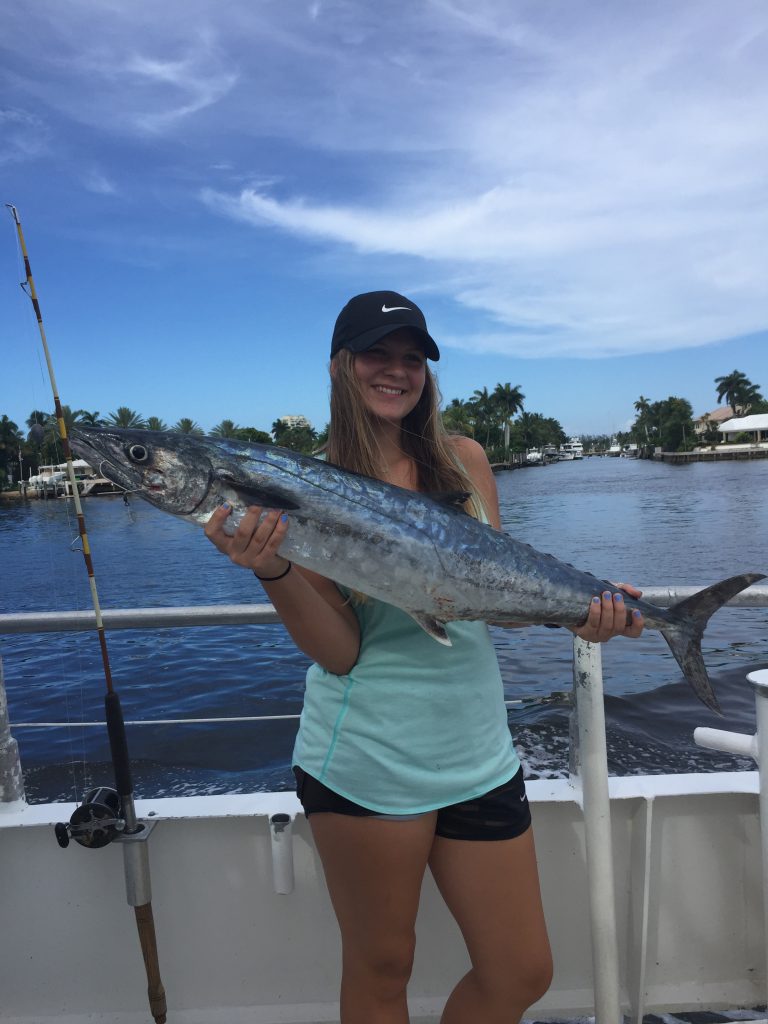 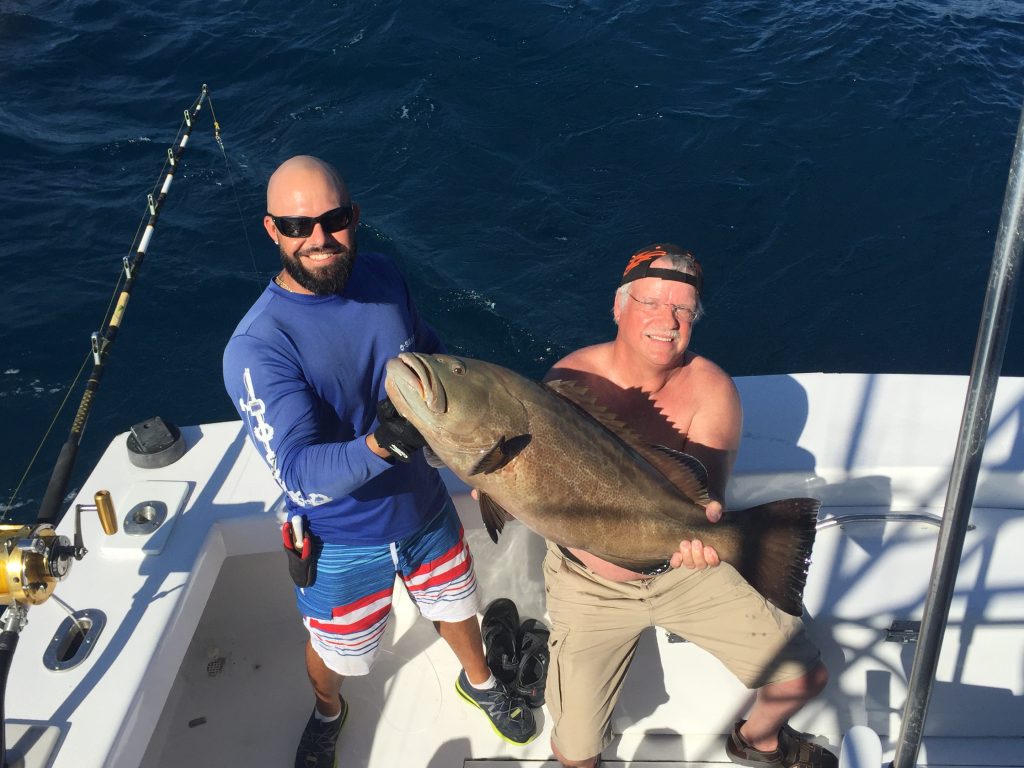 Big black grouper caught while deep dropping over a shipwreck.