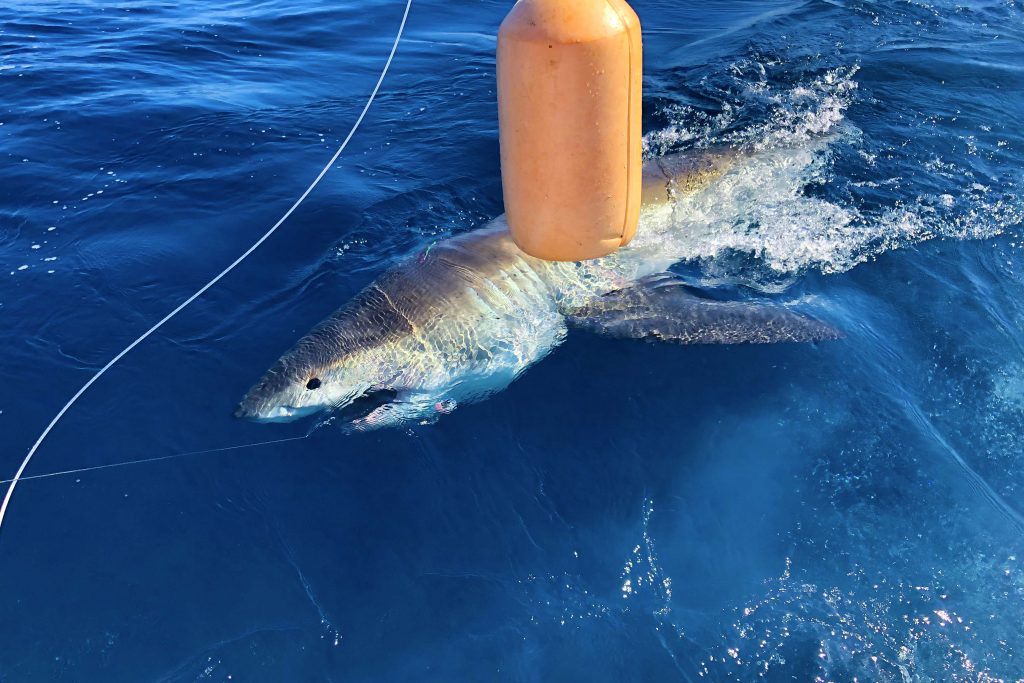 It started out as a slow day. We were 2 hours into the trip and not a fish over 2 pounds. We caught some small bonitos and blackfin tunas earlier in the day trolling the reef, but no action was there to be had. So we switched tactics and put out a nice shark fishing spread. The big rods were deployed, 130 Penn Internationals, a reel that can handle anything. These are the reels we use for when we go shark fishing, just in case a sea monster jumps on the line. You want to have gear that can handle anything that might bite. We were glad we did.

We had two bottom baits set. The first was an 8 pound blackfin tuna we caught a day earlier. The captain wanted to take it for dinner that night but opted to save it in case bait was hard to come by the next day. Fishing had been a little tough lately with some days being very difficult to catch baits. Fishing begins with bait, remember that. So we were glad to have the blackfin and we rigged it promptly with some big hooks, heavy wire and sent it down to the depths to approximately 350ft deep. Our other bait was a fresh bonito, a bloody fish that works well as bait for almost any predatory big game fish.

Sitting there for almost an hour without so much as a nibble, we were starting to regret our decision. I guess today isn’t the day. Captain Pauly was considering switching tactics one last time to shipwreck fishing to try to catch the customers something. We hadn’t much time left in our trip, we were only out for a half day. Suddenly, without notice or a hint of foreshadowing, the deep bait rod on the left tweaked over and began screaming drag off the reel.

“Fish On!” the captain shouted as he put the boat into forward to help drive the steel hooks into the fishes jaw on the strike. This isn’t the kind of rod you can lift up and yank back on to set the hook. After a minute of driving forward, we were confident the hook was set well enough and we moved the rod over to the fighting chair. The angler was strapped in and the fight began.

We could tell right away that this wasn’t an average shark. We shark fish every day and while every shark is strong and fights hard, this fish had ‘weight behind it’ and wasn’t showing any signs of fatigue after pulling so much drag. A good captain knows, on a big fish, to pull the fish ‘with’ the current. Swimming into the current, a fish can just shoulder down and use his big pectoral fins to plane down, exerting little to no energy. Pull the fish ‘with’ the current and you force the fish to change depths, swim to the flank and even surface, just to keep the water flowing over his gills so that he can breathe. This tires the fish out with efficiency so you don’t exhaust your angler before the fish.

Well this fish was savvy to that tactic and it had the stamina of a horse. We had to change out anglers 5 times during the fight as each angler was drained after 10-20 minutes of battle. At one point during the fight, the fish flew up to the surface and breached. That’s very rare for a shark to breach the surface and leap into the air. Most sharks try to stay deep during the fight. When the shark breached we could kind of see the shape. The captain and mate looked at eachother, speechless, afraid to predict what they thought they saw. In the back of their minds though, they knew…. it was a Great White Shark.

Great whites are extremely, extremely rare. Out of the 60 or 70 fishing charter boats that operate out of Fort Lauderdale and shark fish every day, I can think of only 2 boats that have caught one (one of them is now us).

After an hour plus long fight, we finally had the fish close to the boat. When the fishes head popped up over the whitewater and we could clearly see the shape and face of the fish, our suspicions were confirmed. We had just landed a Great White Shark. Howls and shrieks of jubilation all around. This was a once-in-a-lifetime catch and everyone knew it. Of course the cameras came out at that point and we all snapped 1,000 photos per second.

The mate held the fish on the leader near to the boat and the captain ran down and put a tag into the fish. This is a research tag so that if the fish is ever caught again, we can see how far it has traveled and how much it has grown in that time span. Everyone waved goodbye and the mate cut the wire leader, leaving only one hook in the fishes upper lip. The hook will be a nice piece of jewelry for the shark for the next few months until it rusts or falls out.

Everyone aboard had a hand in catching this giant. From the captain, to the mate, to each angler on the trip, everyone helped land this bad boy. This was a catch of a lifetime for our boat, a catch that may never be matched. A catch that we will remember forever.

Thank you to everyone who fished with us. Good luck to everyone fishing in these coming weeks. There are some sea monsters biting on our Fort Lauderdale fishing charters this week. Let’s go fishing!