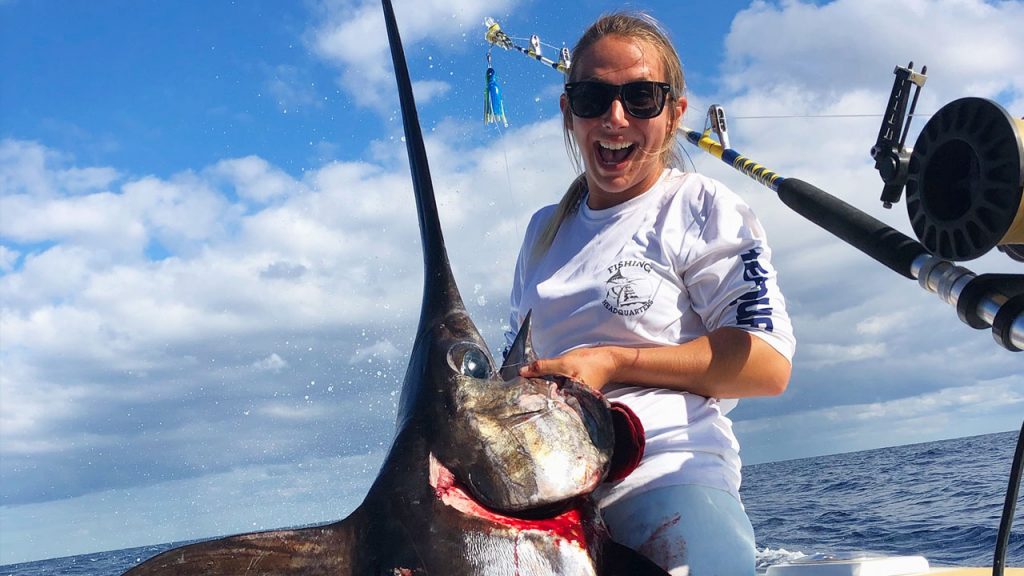 We had a great swordfishing trip the other day here at Fishing Headquarters, I just had to write a report about it.  We took out Kaylee and her dad Michael out for a daytime swordfishing charter.  Kaylee had fished with us a few weeks earlier and caught her first swordfish, but she wanted to take her dad out in hopes of catching one with him.  So we picked a nice weather day and booked a daytime swordfish charter.  We like to get out early on a daytime swordfishing trip this time of year because it gets dark early.  We like to troll on the way out and the way in on a daytime trip, since we are traveling right through prime mahi-mahi territory and the trolling is good in the daylight hours.  So we left the dock at 7am and as soon as we hit 100ft of water, we threw out the mahi-mahi lures.  We always fish a couple baits that a big marlin would pile on, just in case we drive over one of these elusive gamefish.  You never know what’s going to happen on these deep sea fishing trips.  On the way out, we hit a few skipjack tunas and we got a small mahi.  Not much to speak of, but you can’t catch them without putting in the time. 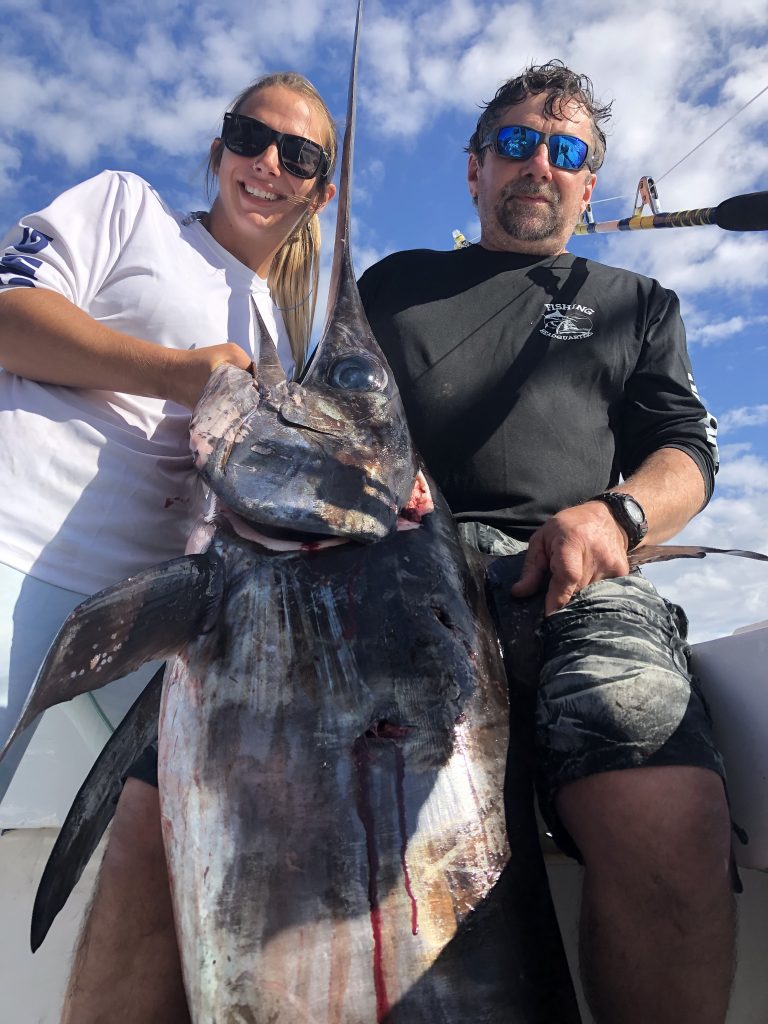 Kaylee and her dad Michael with a big swordfish just boated.

So we get out the grounds and we start doing our drops.  First drop, fish on almost instantly, but we pull the hooks after the first minute.  Second drop, no bites.  Third drop was the charm.  We hooked into a nice one.  By the way it was fighting, we knew it was a keeper.  We loaded the harpoon and waited for the fish to get into range as we reeled him up.  Soon as the fish got into harpooning distance, we launched the harpoon.  Mick, the harpooner, hit him on the first throw… a deep shot to the sweet spot just below his dorsal fin.  We got the fish close enough for a gaff shot and Michael (the angler) got the first gaff stuck perfectly in the gills.  Kaylee readied the second gaff and once we stuck the second gaff in, we had him.  There was no escaping for this magnificent swordfish. We yoked him over the gunnel and everyone screamed with exuberance.   There’s no thrill quite like getting a big swordfish into the boat.

The day was late and instead of trying for another bite, we decided to end the day on a high note.  We pulled in our lines and ran the boat home to get our much deserved photo shoot at the dock.  It was a helluva day at sea and it was a lot of fun.  If you want to see the awesome video of the fish right next to the boat, check out the awesome video we posted on our Youtube channel.  We got some good footage of this one.  And I am getting more and more video of our fishing trips these days, so please give us a subscribe on our Fishing Headquarters Youtube channel so that we can grow it.  The more subscriptions I have, the more fishing videos I will post.  Thank you to everyone who fished with us.  I’ll sea ya on the water.