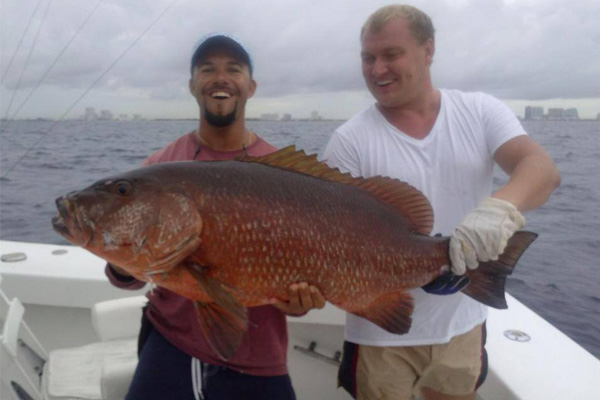 What an awesome catch this week with a 41 pound Cubera Snapper.  We hardly ever see these fishing in Fort Lauderdale.  Of all the snappers in the snapper family, these are the biggest.  They have huge fangs, both top and bottom jaw, plus a lot of accessory teeth.  And what a fighter!  Cubera snapper have the size and strength to put up a long and tiresome fight.  The way we normally target Cubera snapper is to use a live lobster for bait and even then they are a rare catch.  Once in a blue moon, we’ll catch one while deep dropping around a wreck on a live bait.  Amazingly, this is our second cubera snapper this month. 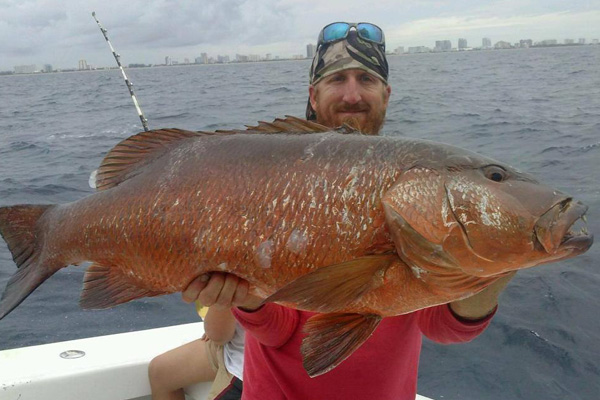 This particular Cubera snapper we caught while we were shark fishing in 300ft of water.  The fish ate a whole bonito that we had butterflied and sent to the bottom.  The bait alone weighed about 6 pounds.  When the fish got close to the surface and we could see it wasn’t a shark, I thought it was a grouper… there have been a few big warsaw groupers biting.  The Cubera weighed 41 pounds. We put the baits back out and we caught our big shark, a 7ft sand bar shark which we caught and released.  Great catch, I’d love to see more of these get caught and September is one of our best months for Fort Lauderdale snapper fishing.