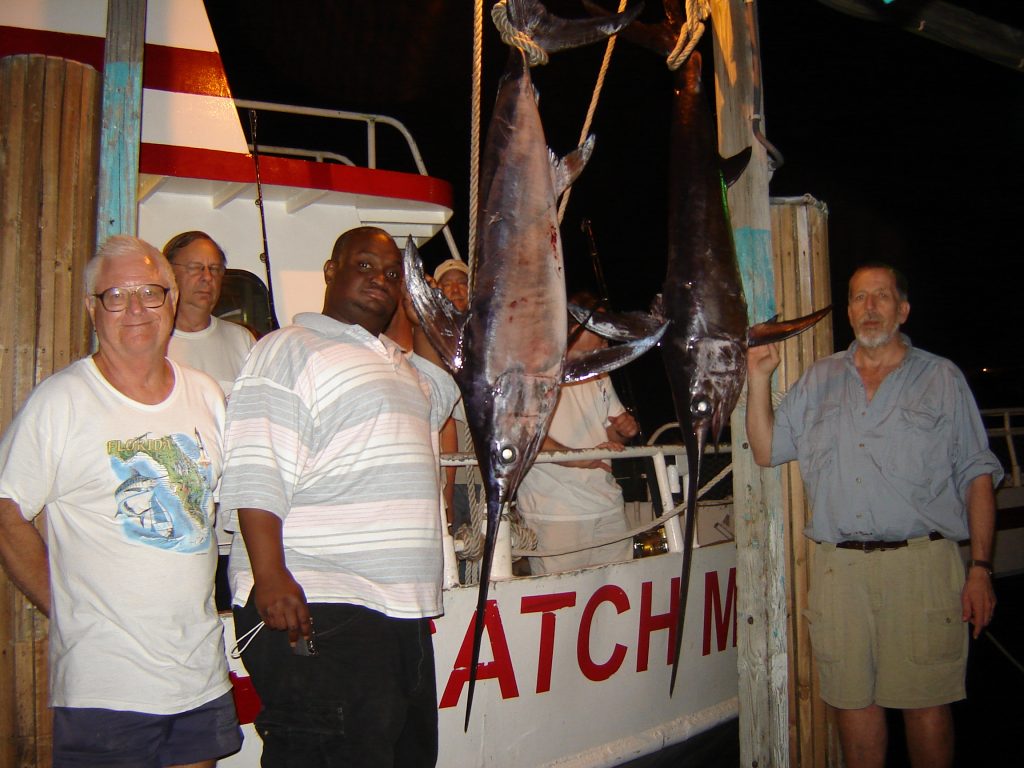 Our Swordfishing trip last night was a blast.  I heard from most of the charter boats that it was a slow night, but we did great.  The weather was nice, the fish were biting and we had a lot of first timers out there last night.

We basically made just 1 really long drift.  We just kept getting bites throughout the night.  We ran out there, to our normal fishing grounds in the middle of the Gulfstream current.  We set out the lines baited with rigged squids and live bait blue runners.  As soon as it got dark, we hooked up on our first fish.  We pulled the hook on him pretty quick.  About 10 minutes after that, we get a double header on.  Both  seemed like nice fish, although we never got to see them.  About 10 minutes into the fight, we pulled the hooks on both fish.  We were disappointed to loose them, but only a 1/2 hour into the trip and we already hooked into 3 fish, we were getting excited and we knew we were in the right spot.

A little while later, once we reset the lines out there, we hooked into our 4th fish.  We fought him for about 40 minutes and it was a good fight.  We gaffed him and got him into the boat.  It measured out to be a 56″ forklength, about a 80 pounder.  Willie Coleman was the angler on that fish and he did a great job fighting him.  This was his second swordfish he’s caught with us I believe. 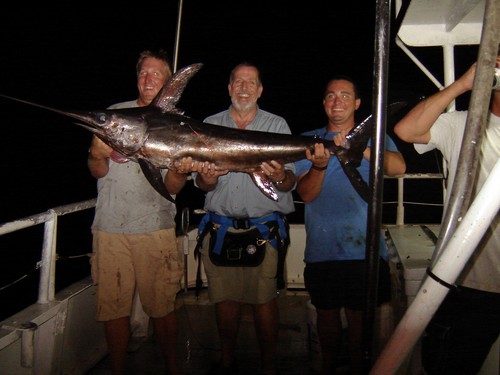 We were catching fish, no sense in moving, so we set the lines out again.  About an hour later we hooked into a huge swordfish.  It came up jumping right away, tailwalking and putting on an awesome jumping show for us.  It was jumping about 20-30 yards off our stern and everybody got to see it.  It looked to be about a 100-150 pounder.  The fish ended up shaking the hooks on us, but we got 5 really good jumps out of it.

Around an hour later we got our sixth fish of the night on.  We ended up catching that one as well, which measured out to be 54″ forklength, probably a 60-70 pounder.  Jim Reckert was the angler that caught that fish.  By then it was time to come home, but it was an exciting night.  Lots of bites and almost everybody got to do battle with a swordfish, even if just for a few minutes.   Thanks to everyone that came and I hope to see you back out there with us again soon. 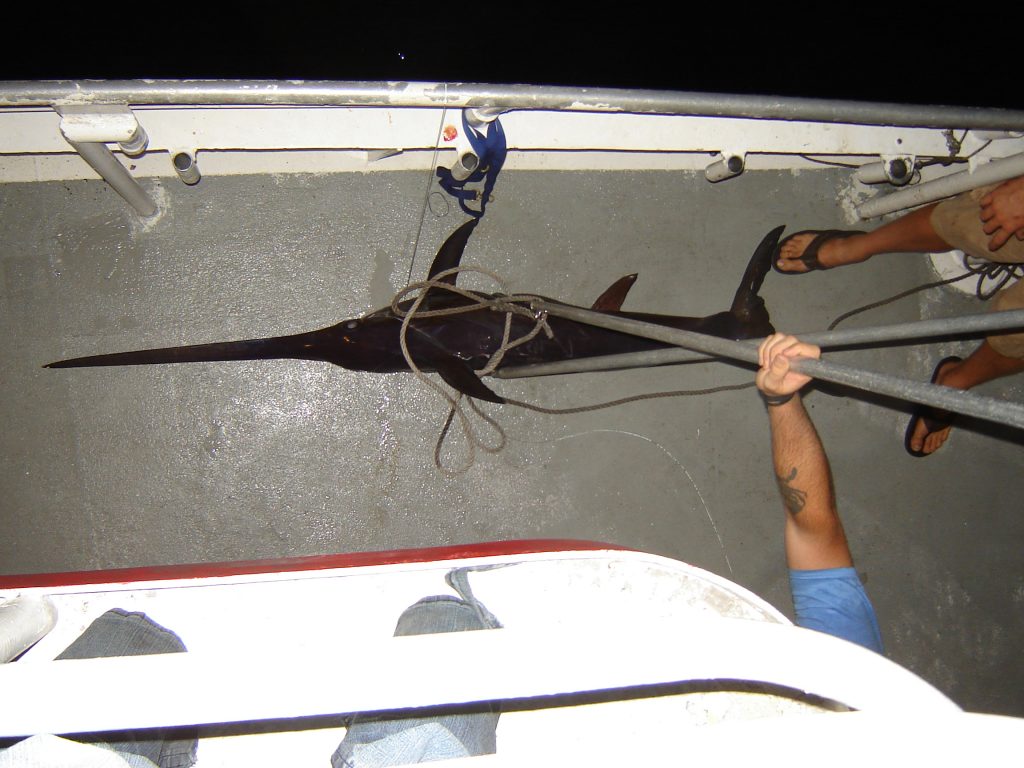 Anyone interested in going out with us next Friday, make reservations soon.  Within the next few weeks we are gonna change how the swordfishing trips are run.  We’re going to  raise the price a small amount, but limit it to 12 fishermen, instead of 15.  This will work out better I think and if we have to, we might start running 2 swordfish trips a week.  They are biting pretty darn good out there and the weather has just been absolutely gorgeous. 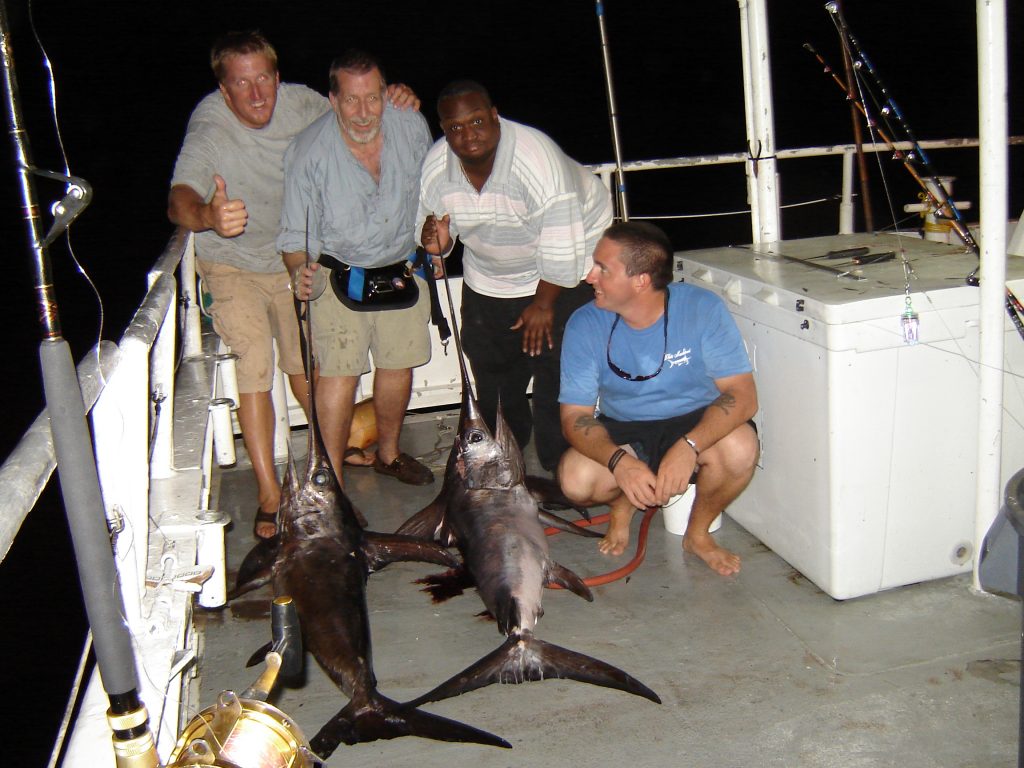