Fishing Improving in Fort Lauderdale on the Reef and Wrecks 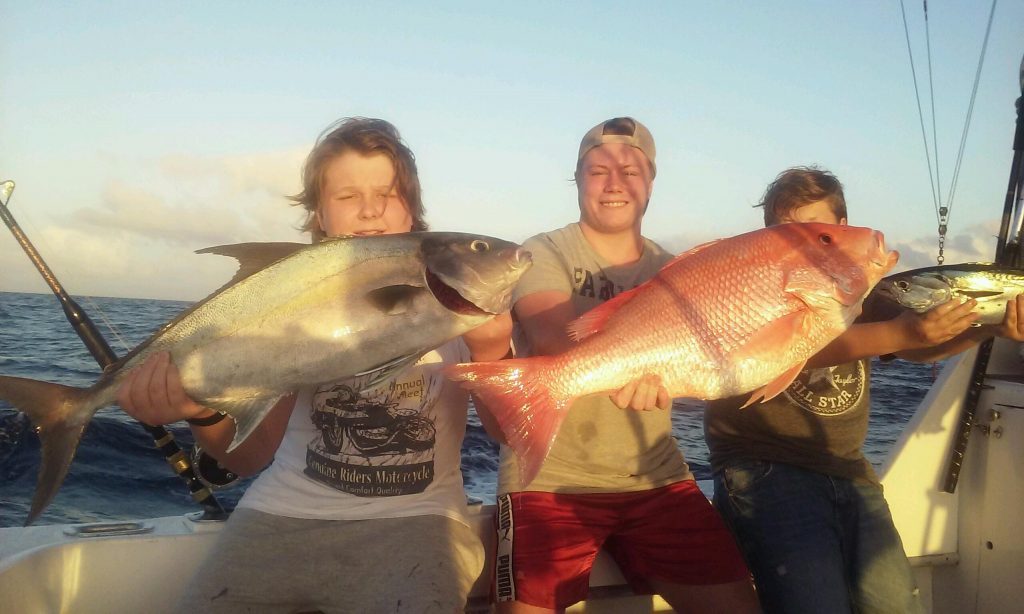 During the week after the Christmas holiday, every boat from Key West to Maine was out fishing.  This creates a lot of pressure on the fishing and the fishing inevitably gets slow following the Holiday week.  We’ve had a few really tough trips last week when not much was biting.  Finally we’re seeing the light at the end of the tunnel.  The rough weather over the past couple days has kept all the boats in from fishing (except for us!) and has allowed the fish to accumulate on the reefs again.  That little window of no boats out fishing has really lit up the fishing.  Not to mention that a whole new batch of fish are moving through our waters by now.  Don’t forget, fish are migratory; they’re always moving.    This week the sailfish started moving through in big numbers.  Also, mahi-mahi, tunas and kingfish began hiting again.  Action on the reef has improved immensely over how it was last week. 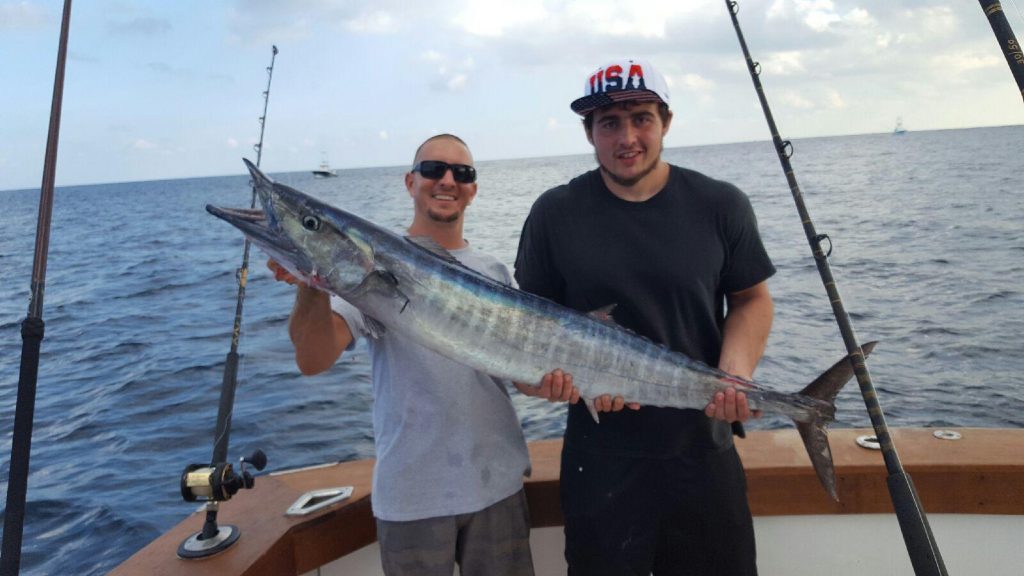 Nice wahoo caught trolling on our sportfishing charter out of Ft Lauderdale.

The cold weather we had these past few days is the coldest air we’ve had all year.  Sailfish love the cold air, it gets them very frisky.  Over the course of this winter, we’ve caught a lot of sailfish.  But on our half day charters, we’re catching maybe 1 or 2 on a good trip.  During this cold front, with the temperatures hitting the mid 50s, we’ve had some trips where we’ve caught 4- 6 sailfish.  This is the sailfishing we look forward to all year long and the reason the cold fronts are so looked forward to.  Strong east winds, which actually make the ocean kind of rough, is also a good thing for the sailfish bite.  Kite fishing is a technique that requires a good stiff wind and combined with the cold snap we’re having, it really gets them going. 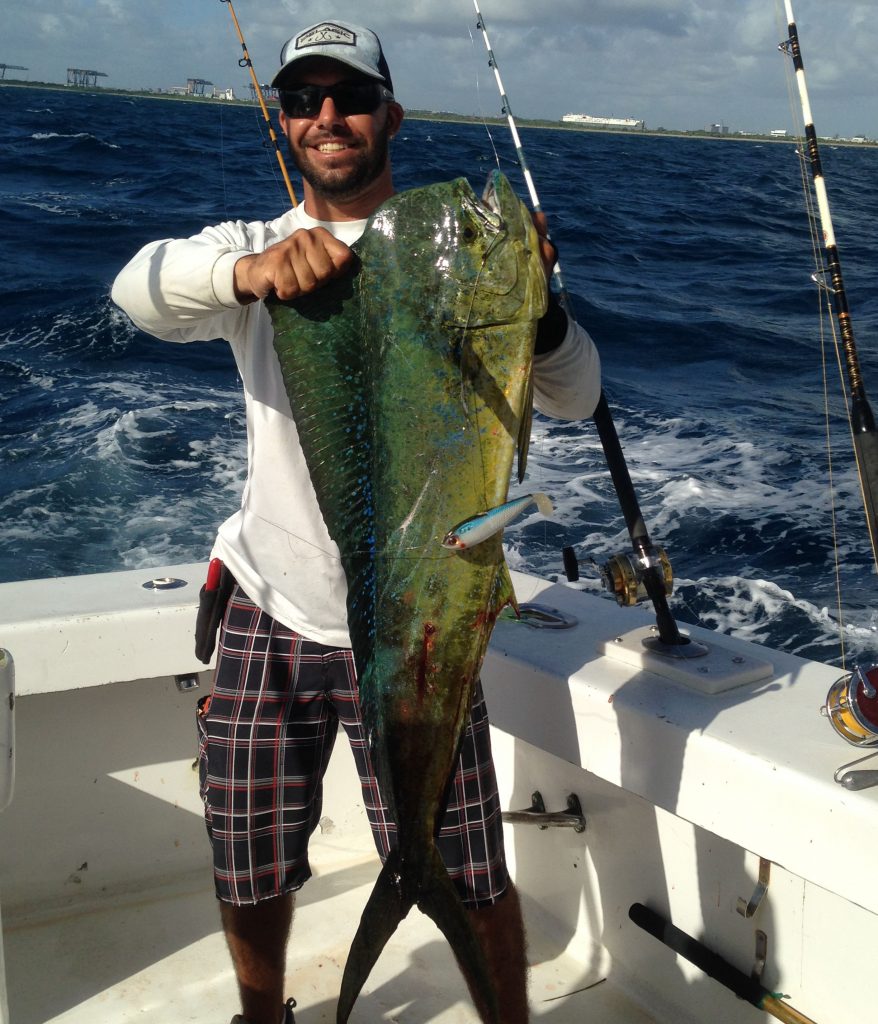 Mahi-mahi and tuna love the strong winds too.  The rougher the better where dolphin are concerned.  Larger tunas actually prefer it calm, but the blackfin tunas which are the ones we catch here in Lauderdale, love choppy waters.  We catch them by dragging small jigs and natural feathers around the reef and offshore.  Tunas pile on an easy to suck down bait like that.  Dolphin are less picky and will eat just about anything they come across.  You just need to drag the bait past somewhere near them and they will inhale it.  I’ve seen dolphin trying to eat baits that are larger than their whole body.  Mahi-mahi dolphin are a funny fish.  Wahoo are a more unexpected fish to be caught this time of year, but they still bite.  We catch them here and there when trolling the reefs, most times when we aren’t expecting them.  A wahoo almost always hits the deep bait and hits with such ferocity that they are unmistakable. 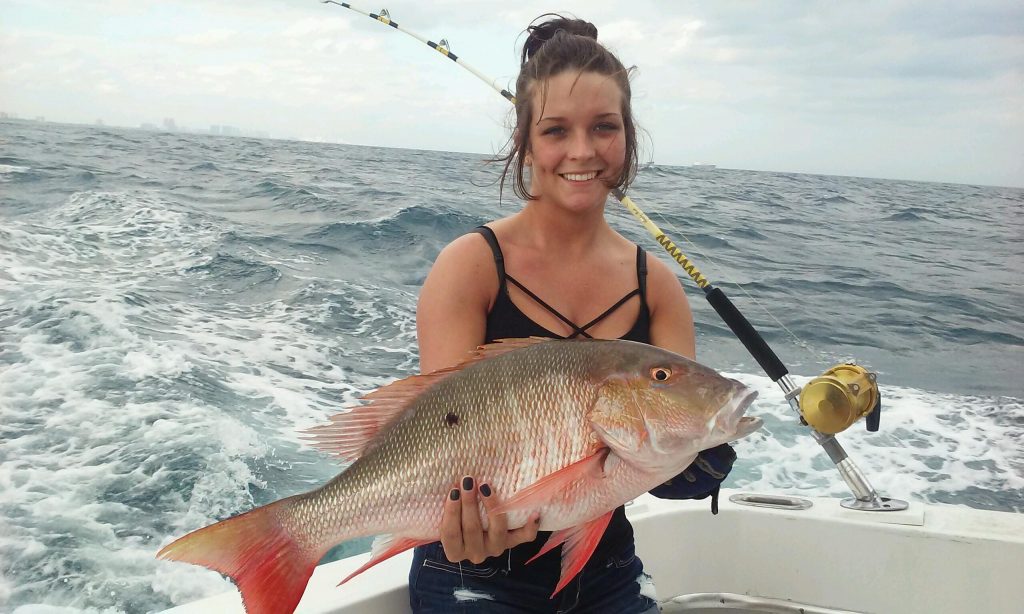 What a beauty! And a nice looking mutton snapper too! Good catch on our sportfish trip

With the slowdown of pelagic fish last week, we resorted to a lot of wreck fishing.  Wrecks are underwater oases for deepwater fish such as amberjacks, grouper, snapper, cobia, barracuda, sharks and more.  There is a lot of diversity of species around a shipwreck and fish often move from wreck to wreck following the baitfish as they move from wreck to wreck.  One day a wreck may be holding some monster fish and the next day, nothing.  When we go wreck fishing, we hop from wreck to wreck to wreck until we find where the fish are amassing.   This is the benefit of fishing the afternoon trip, as we have already done our experimenting during the morning charter.  This week we’ve had some excellent action deep dropping around the wrecks. 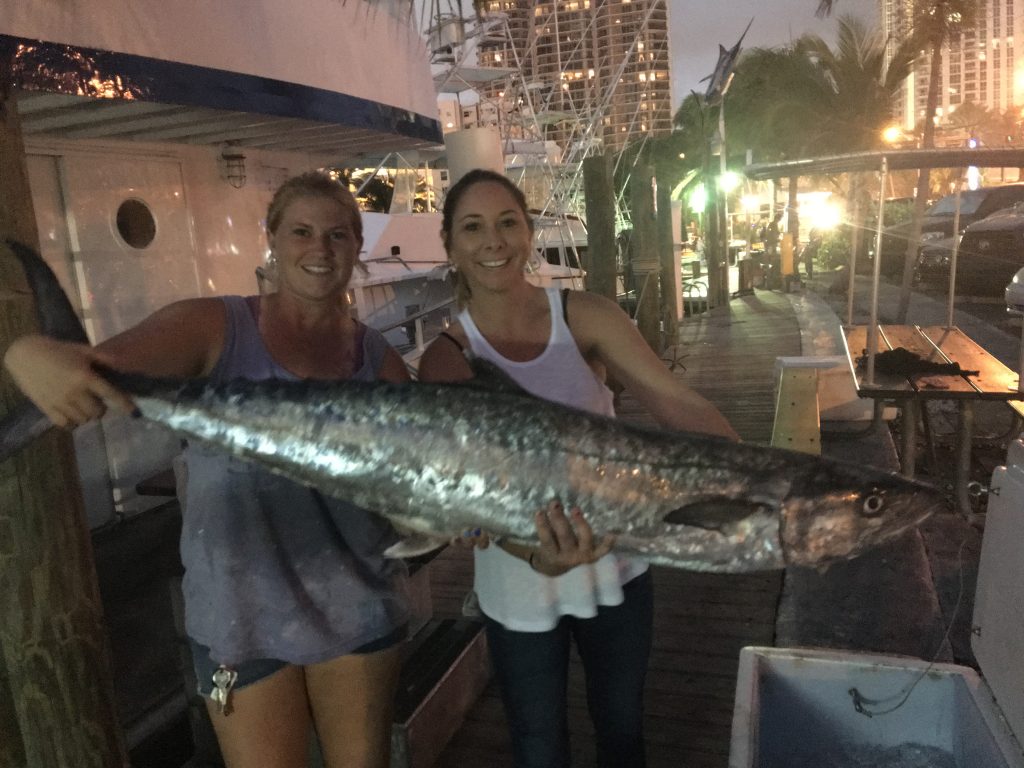 Snappers are biting excellent this month.  Vermillion snappers are caught deep dropping chicken rigs over rocky bottom.  Yellowtails and mangrove snappers are caught by drifting or anchor fishing over the mid-depth reefs.  Mutton snappers are also caught by this method or by fishing around wrecks.  Red snappers are caught by fishing live baits near to wrecks.  There are over 400 species of snappers in our waters but these are the main ones that we target.  All are fished for using different techniques and in different areas.  Our drift boat excels at catching the shallower water snappers… yellowtails, mangroves and muttons.  Our sportfishing charters excel at catching the vermillion or red snappers.  They are great eating fish and enjoyable to catch.  The smaller snappers group up into schools of fish and can be caught in generous numbers. 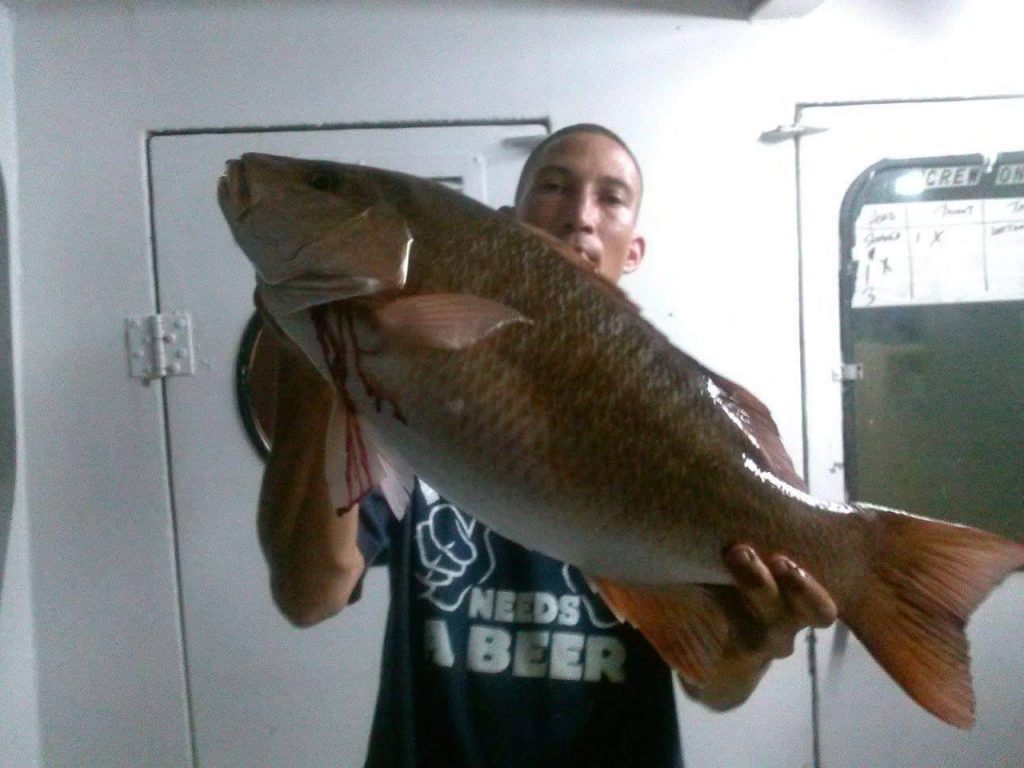 Groupers are another bottom fish which are a strong, challenging fish to catch.  Most of the shallower water groupers are out of season until May, which gives them a chance to spawn and revive the shallow water grouper population.  We’ve been catching some black groupers and red groupers that we have to throw back.  It sucks to throw them back but it helps keep the stock of fish managed so we don’t overfish them.  Deepwater groupers however are not out of season.  Our sportfishing boats are catching some very nice snowy groupers and sometimes the biggest of the big, warsaw groupers.  Warsaw groupers grow to humongous sizes.  They are caught anywhere from 200-500 ft of water and are the biggest grouper that can be caught and kept.  The only grouper which can get bigger than them is the Goliath grouper, which is protected year round.  Groupers are great eating fish and are challenging to catch because of their strength and their wit.  This week, we’ve caught a lot of nice sized groupers on our sportfishing charters. 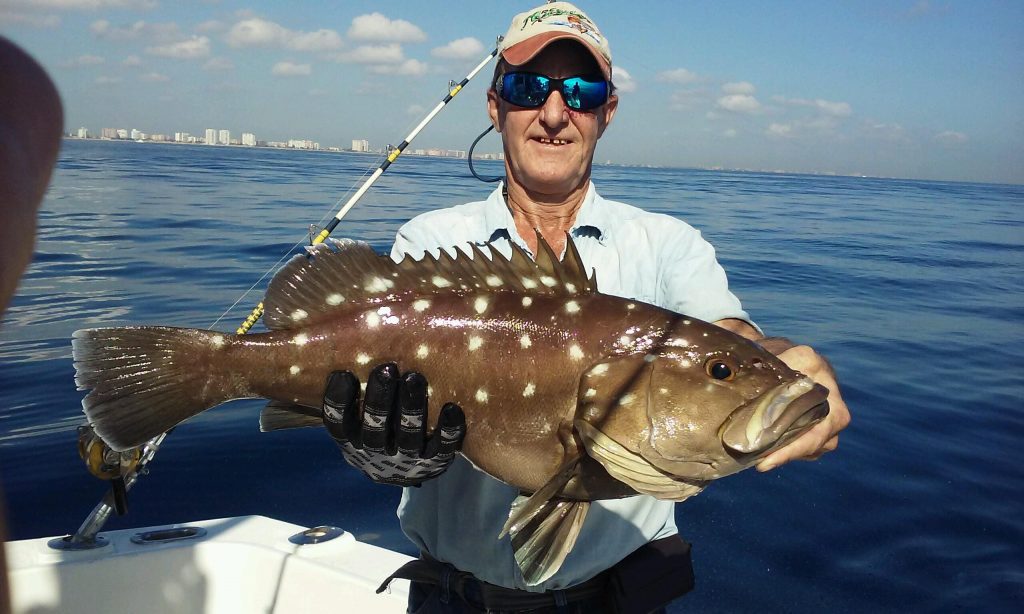 Amberjacks are mostly a springtime fish, caught in big numbers throughout March-June.  But they seem to be showing up early this year with some big ones caught over the past few weeks.  Amberjacks are pound-for-pound the strongest fish in the ocean. The amberjacks we catch in south Florida are considered the ultimate deepwater gamefish.  Over the past few weeks, we’ve pulled up some really big amberjacks.  Their closest cousin, the almaco jack, is another species that is biting steady now around the deep spots.  Both of these fish put up an extreme fight, even when caught on the heaviest of our tackle.  That’s why I so much love wreck fishing.  You never know what you’re going to catch and you can pull up just about anything off the bottom. 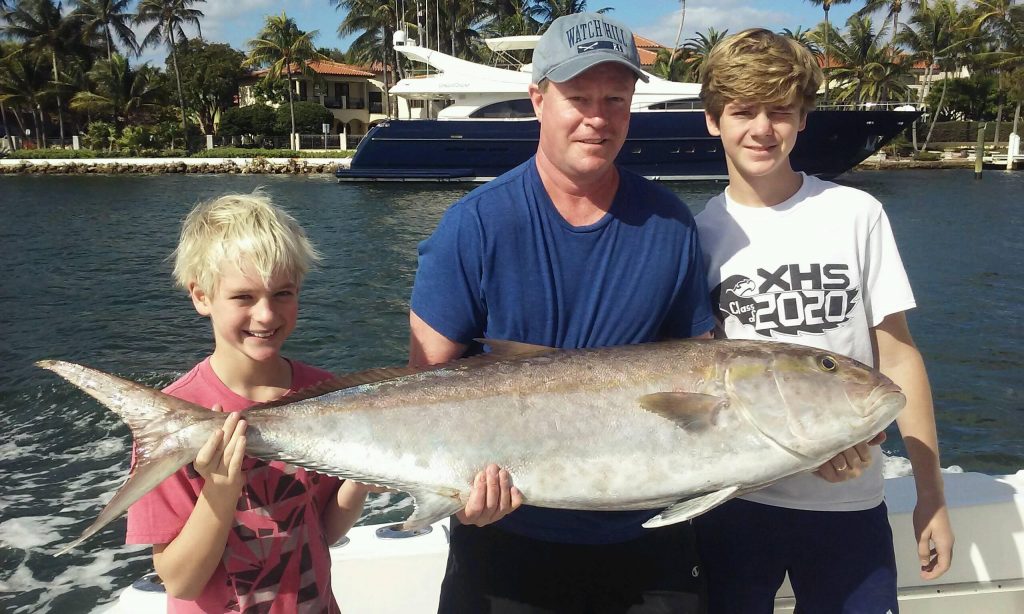 Nice amberjack caught by these guys during their Ft Lauderdale fishing vacation.

With the re accumulation of  pelagic fish on the reefs and the edge of the Gulfstream, coupled with the excellent wreck fishing, we’re getting into some good fishing action once again.  Look for shark fishing action to pick up in the weeks ahead as well as Swordfish.  Swordfishing is generally awesome throughout the month of January.  The rest of the month should be steadily improving fishing.  Don’t let the wind scare you.  Windy weather is super fishy and the windiest days are the best days to go (except for possible seasickness).  Where the fishing is concerned, activity on the top of the water (waves), creates activity below it.  Look for some great catches while we have the wind in our favor.  Let’s go fishing! 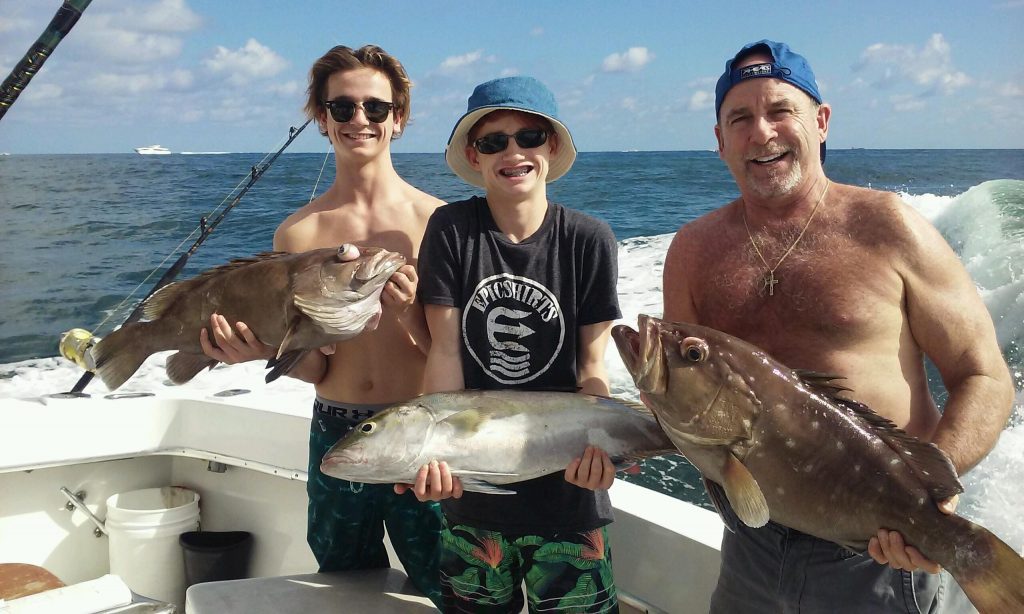