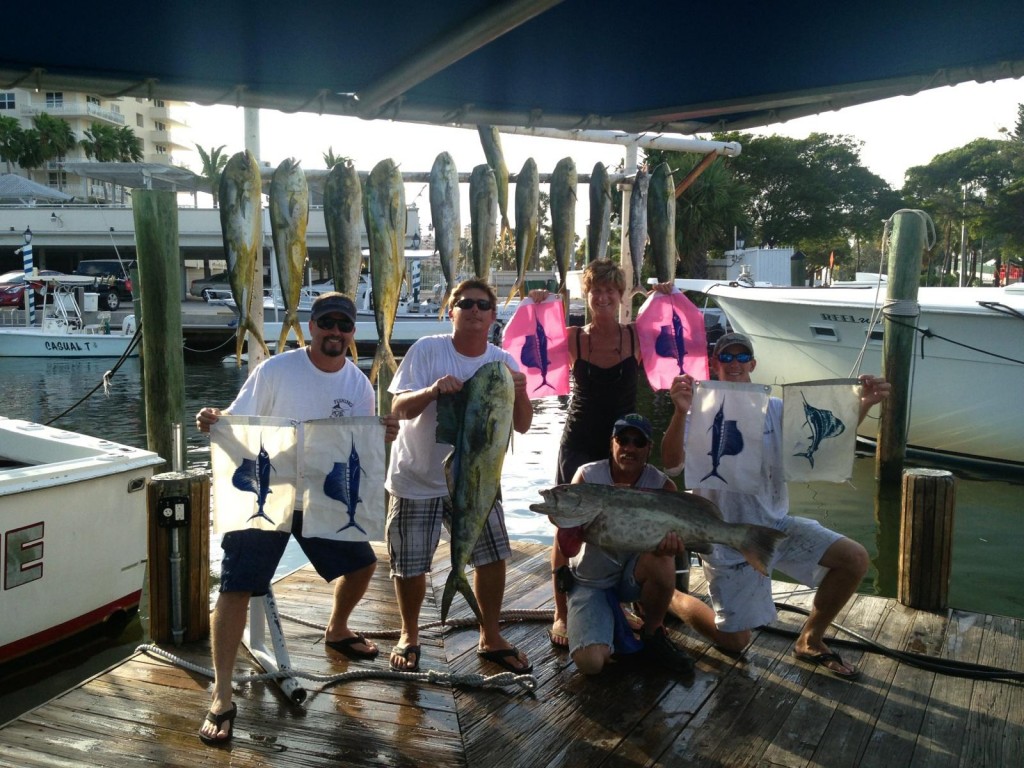 Absolutely incredible fishing is going on in Fort Lauderdale this week.  The big winds are kicking up some big fish, and lots of them.  The dolphin bite is off-the-scale this week.  All week, mahi-mahi dolphin are being caught in droves.  Today, we had a Full Day sportfishing charter on the Big Game.  The day started out with a slam!  First thing in the morning, we hooked up into a triple header sailfish and caught all 3 fish.  We put the baits back out and almost immediately hooked up into ANOTHER TRIPLE HEADER!!!  Once again, they landed all 3 sailfish and released them.  And then it gets even better… 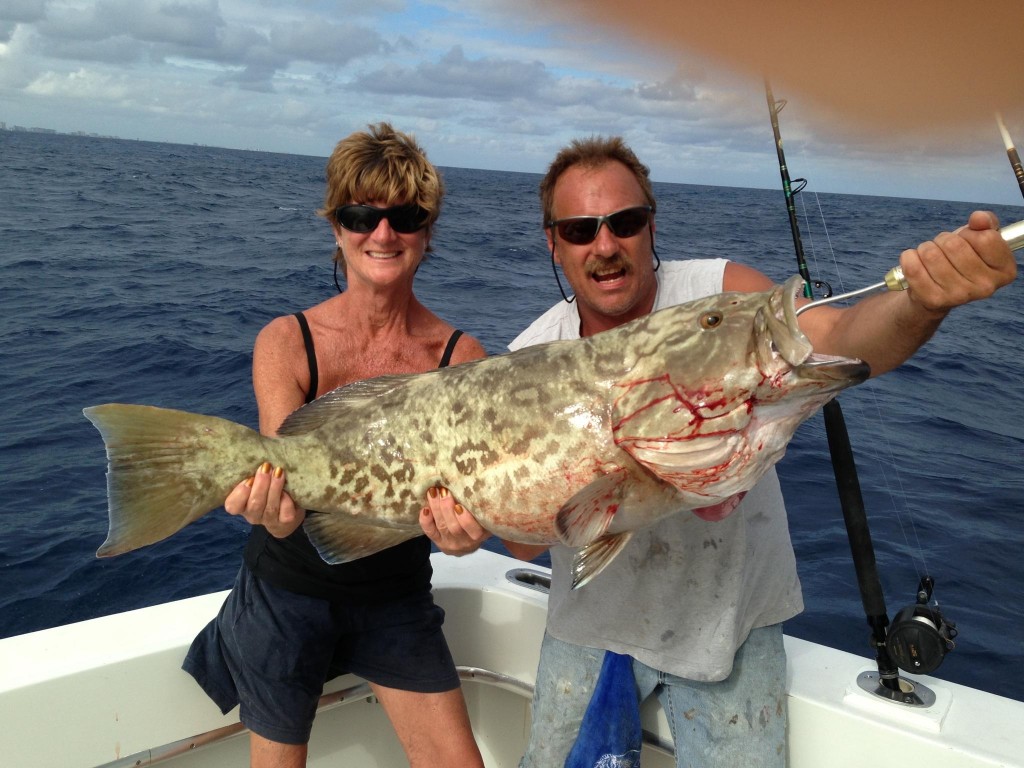 We caught our fill of sailfish, so we decided to go offshore and troll for some dolphin.  The dolphin bite this week has been outstanding, so we had good confidence that we could find some.  We didn’t need to go too far offshore to find the dolphin.  They were everywhere.  We picked at them one or two at a time for a couple hours, trolling along any weedline we found and chasing down birds that looked like they were following fish.  After a few hours of dolphin fishing, we had 13 dolphin in the box, released a few others that were too small, and missed a couple nicer ones.  Wow.  And then it gets even better… 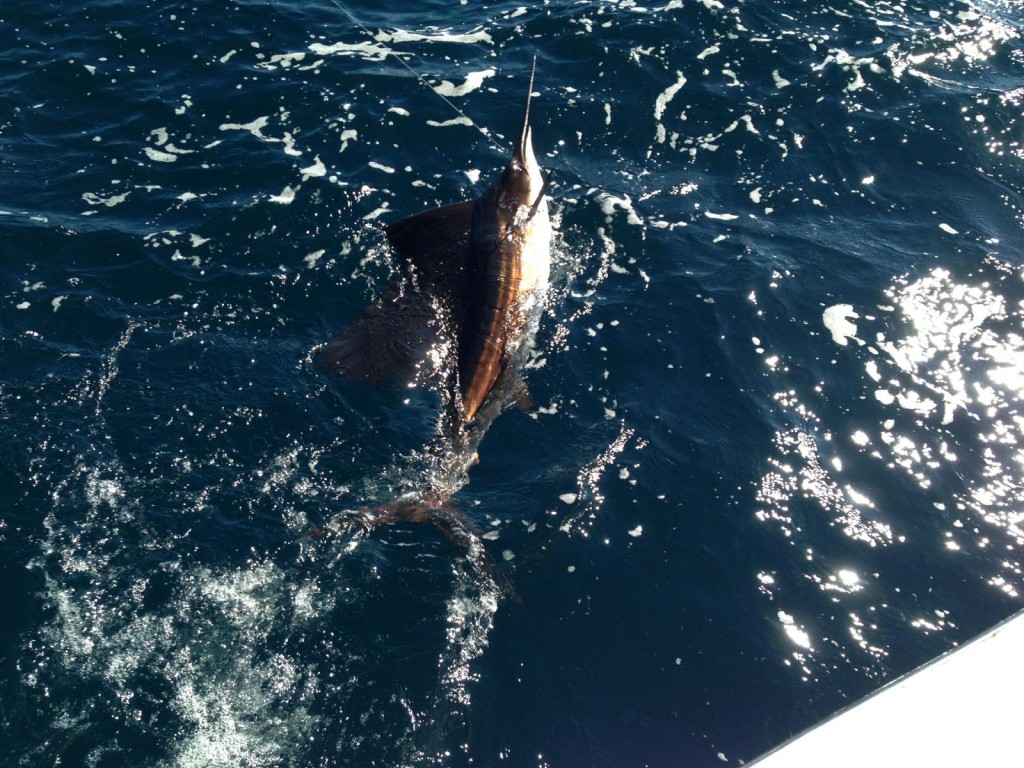 Nice shot of a sailfish jumping near the boat

We had plenty of dolphin in the box and time was starting to run short.  We were straight offshore of a good wreck that I like to fish, so we made a short run to do a drop on top of the wreck.  We baited up a live blue runner and sent him down.  The bait wasn’t down long before the rod doubled over and the mate yelled up, “Go Cap’t… GO!!”.  We put the boat in forward and throttled up.  This is an attempt to pull the fish clear of the wreck, of which he will try to pull you into and wrap the line around a rock, in order to get free.  These fish are very well trained, especially the big ones.  After a grueling fight, we got the fish to the surface.  When the fish surfaced from the depths, we heard a loud release of gas from the fishes belly, like someone letting the air out of a car tire.  It was a monster gag grouper, approximately a 30 pounder, as big as we ever catch them.  This was the perfect topping to an awesome day of fishing. 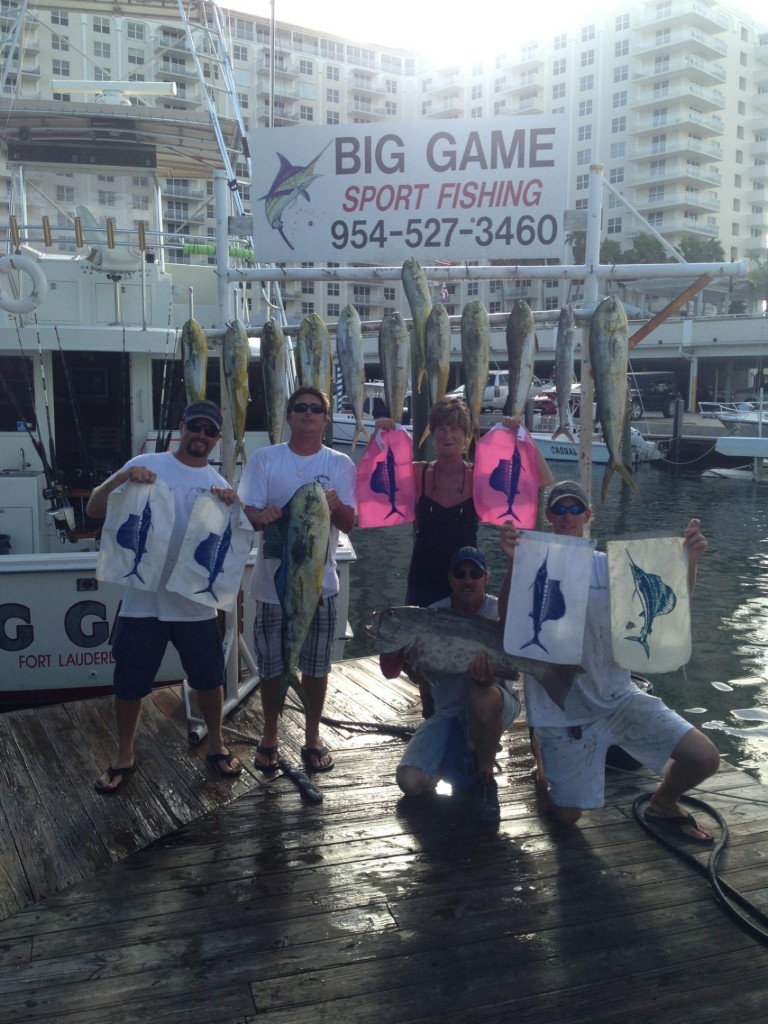 Gag groupers typically school up, and where there’s one, there is usually more.  We tried a few more drops on the same wreck but no more bites.  This fish was solo.  With a fine catch in the box, we reeled everything in and headed for home.  The fishing this week in Fort Lauderdale has been world class with the sailfish and dolphin bite off the chain.  November is an excellent month for fishing Fort Lauderdale, where you can catch literally anything.  Don’t let the rough waters scare you, this is the time when the fishing is best.  Rough waters means that less boats are out there fishing, so more fish for you.  And activity on the top of the water gets the fish active and biting.  Good luck to everyone fishing this and have fun with the awesome fishing!!