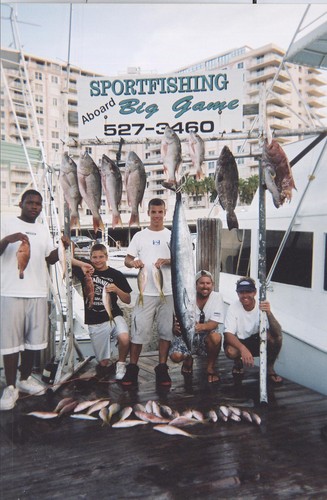 Back from the Bahamas on a fishing charter

Last week we had a week long Bahamas Fishing Charter on our sportfishing boat the Out of the Blue.  It was a fun trip and we caught a lot of fish.  We went to Bimini which is the closest island in the Bahamas island chain, only 60 miles from Fort Lauderdale, Florida.  We set out early Monday morning at 6AM and started our crossing.  The customers didn’t want to troll over, so we ran fast instead. About halfway across, in the middle of the Gulfstream, we found a large board floating.  Woot!  The captain slowed down the engines and everybody came out of the salon to see if something was wrong.  Capt. Erik yelled down, “Get out the trolling lures.  Gimme a highline and a couple rigger baits out quick!”  Adam, the mate on the trip, threw out a few baits he had made up and Wham!  Instabite!  Big bull dolphin, maybe a 35 pounder hit. 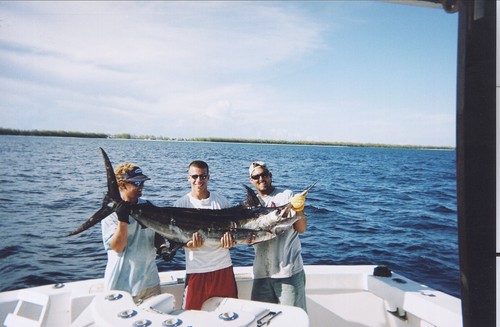 We fought the big bull dolphin, which took us a good 1/2 hour fight on a Penn International 50W.  The fish did some amazing jumps, and probably came out of the water over a dozen times during the fight.  When he came up to the boat, his colors were all lit up.  Adam saw something funny out of the corner of his eye, and saw another dolphin fish following the big one about 20 feet back.  The follower dolphin wasn’t as big, maybe only a 10 pounder.  We pitched out a live pilchard and as soon as it hit the water, the follower mahi mahi ate it.  As soon as he was in gaff range, we gaffed the bigger dolphin and threw him in the boat.  Erik ran down from the boat’s bridge and grabbed the fish bat.  By now the fish was going crazy, and Adam was trying to hold onto the gaff and keep the fish from jumping out of the boat.  A couple good whacks on the head by Erik and the fish calmed down considerably.  High fives and cheers from everyone on the boat.  We circled back around and found the board again.  Made a couple passes by with some lures out, but no other fish were on it.  We even put down a planer bait to see if a wahoo or something deeper was around.  I guess we caught the only 2 fish on it, so we continued on to Bimini.

The next couple days we did a lot of bottom fishing.  Erik and Adam wanted to do some big game trolling for marlin, tuna and wahoo, but the guys that chartered the boat wanted to throw the anchor and try for snappers and groupers.  Bimini isn’t the best place in the world for anchor fishing, but we did pretty good.  One day we caught a 30 pound black grouper, a sweet catch.  Same day we also caught a few nice mutton snappers, one of them being a 17 pounder.  We also caught a whole bunch of yellowtail, which we spent a lot of time cleaning in the evenings.  Thankfully, the Bahamas went back to the old limits as to how many fish you can bring in, so we could actually bring some meat home.

The last day the guys wanted to go shark fishing and Bimini and pretty much all throughout the Bahamas is Prime shark fishing territory.  We soaked some big skipjack tunas that we caught the day before.  Not even a few minutes went by before we got our first big shark on.  We caught a couple monster sharks over there, and finished the trip off right.  The guys got off the boat with some sore muscles from fighting the big sharks we caught that day.  It was a fun trip and some good fishing over there.  I can’t wait till my next Bahamas charter so I can go back over there and try some trolling and deep dropping.