Drift fishing Sportfishing and Swordfishing out of Fort Lauderdale

Captain Andy is on vacation fishing in Alaska this week, so I will be writing the reports until he gets back in town.  Fishing was really good today, we had a couple charters on our drift fishing boats, the Mary B III and the Catch My Drift.  Both trips were great and we caught a lot of fish.  On the Catch My Drift we had a company that manufactures and sells fire sprinkler equipment on the boat.  They were treating their employees and customers to a nice day of fishing in Fort Lauderdale.  We caught a whole mess of bonitos which kept everyone busy winding fish in the whole trip.  We also caught a few mutton snappers, mostly throw backs, but one keep sized one. 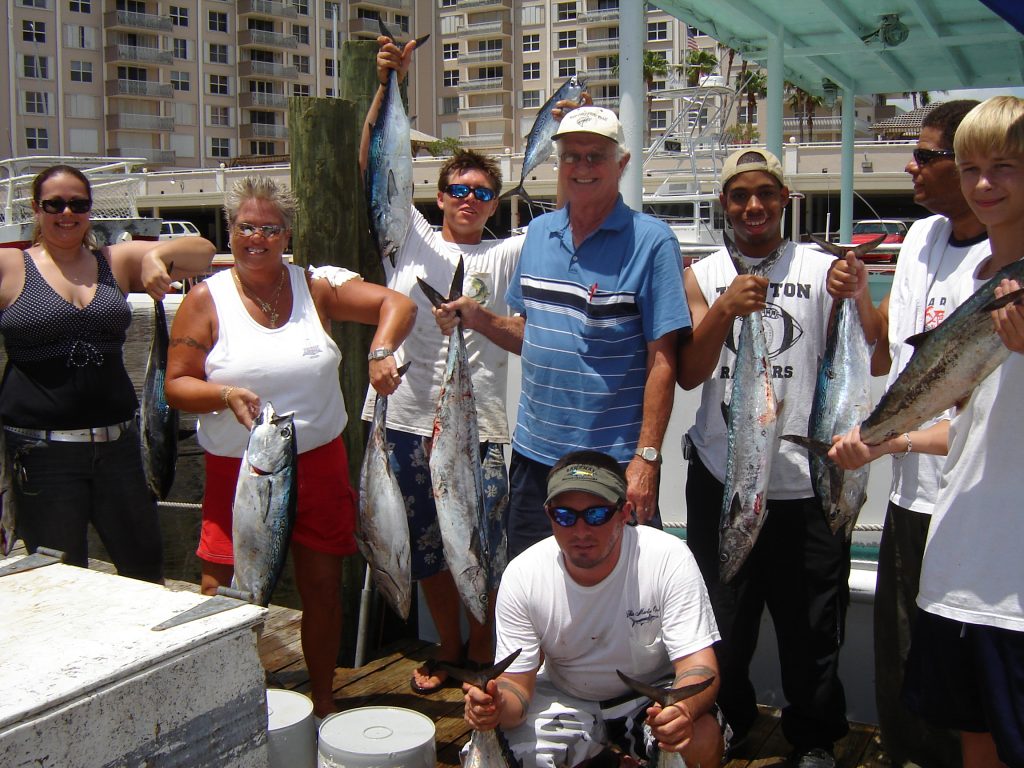 Nice catch on our drift fishing trip out of Fort Lauderdale.

The Mary B III went out the same time with another private drift fishing charter.  We caught about the same on that trip, lots of bonitos and some kingfish.  One of the kingfish was a beauty, about a 15 pounder.  The bonitos are really biting good out there these past few weeks.  They will probably be biting for a few more weeks and then we won’t see them again until next summer.  I’m glad they bit so good this year.  We caught a lot more this year than we have in years prior.

Nice catch on our drift fishing trip aboard the Catch My Drift.

The swordfish trip that we run every Friday night went great this week.  We started off about 15 miles offshore where we normally set up in the middle of the Gulfstream.  We set out our rigged up squids with light sticks and flashing strobes.  Right away after we got our last baits out, we get the bite.  It was a big one and a young guy hooked into it.  He fought it for a few minutes but it tired him out pretty early on and he handed the rod off.  Glen Boehme, from Kings Park New York,  fought the fish for over an hour and half but finally got him to the boat.  It was a huge battle and near the end, I don’t know who was more tired, the fish or Glen.  It was a beaty, about an 80 pound swordfish, but it fought like a 300 pounder.  Later that night we caught another swordfish which was a smaller one.  We released the smaller one and he swam away to fight another day.  We also caught a nice bull dolphin that same night, about a 12 pounder.  It was an exciting night for us.  The swordfish are snapping out there guys.  They didn’t remember to bring the camera out with them that night so I didn’t get any pictures of the fish whole, but we got the carcass out of the freezer before the taxidermy man picked it up and took a picture of it.  Its not as pretty as the fish was whole, but it shows how big the fish was.  Everybody got a bunch of swordfish meat to take home for dinner.  A great night.  If anyone is interested, we still have a few spots left on the Friday night swordfishing trip this week. 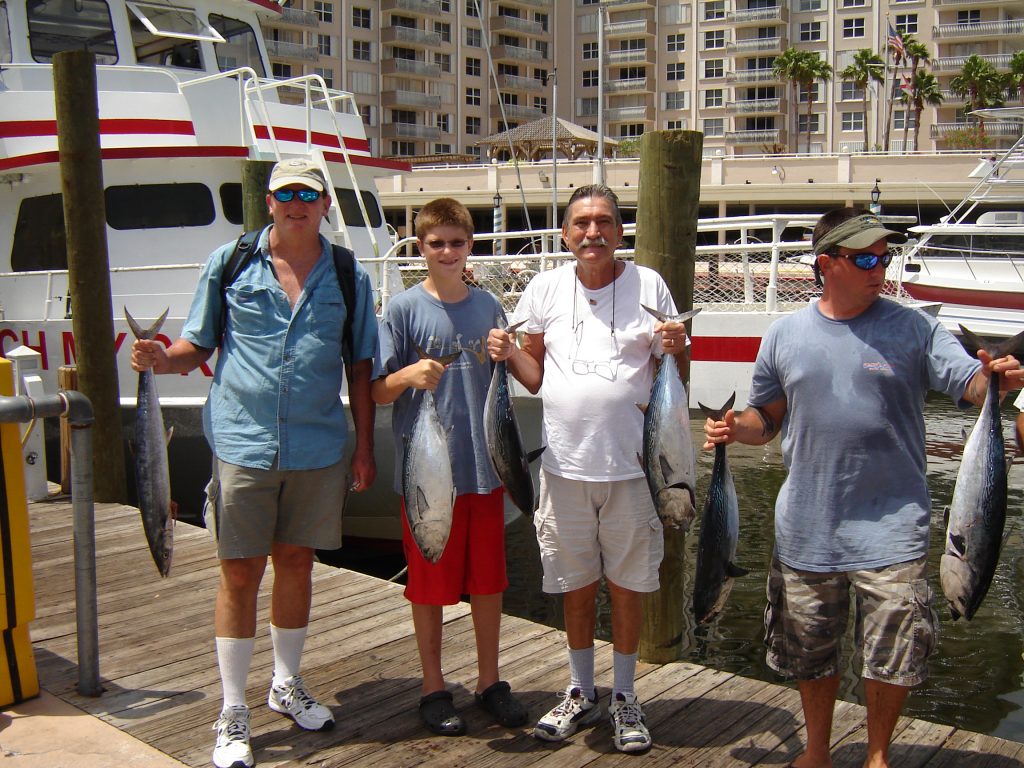 Some bonitos caught on our drift boat

Sportfishing has been awesome this week.  Lots of bonitos and kingfish being caught.  A few sharks have been landed also in the past week or so.  The kingfish and bonito action has been the ticket for us though.  It was a great week of action and everyone we took fishing this week caught lots of fish.  This week looks like its going to be good, so take off a day of work and go fishing! 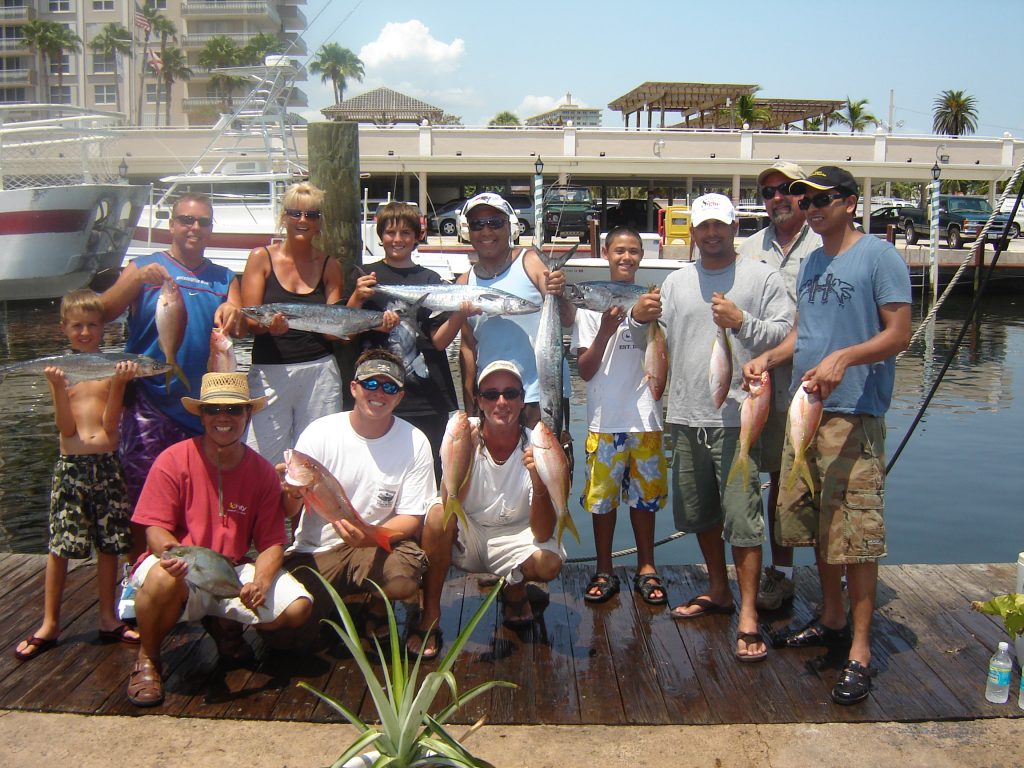 Private drift fishing trip for this group on a bachelor party.

Thanks for reading my report guys, hope you all have a great week and I hope to see you out fishing with us.