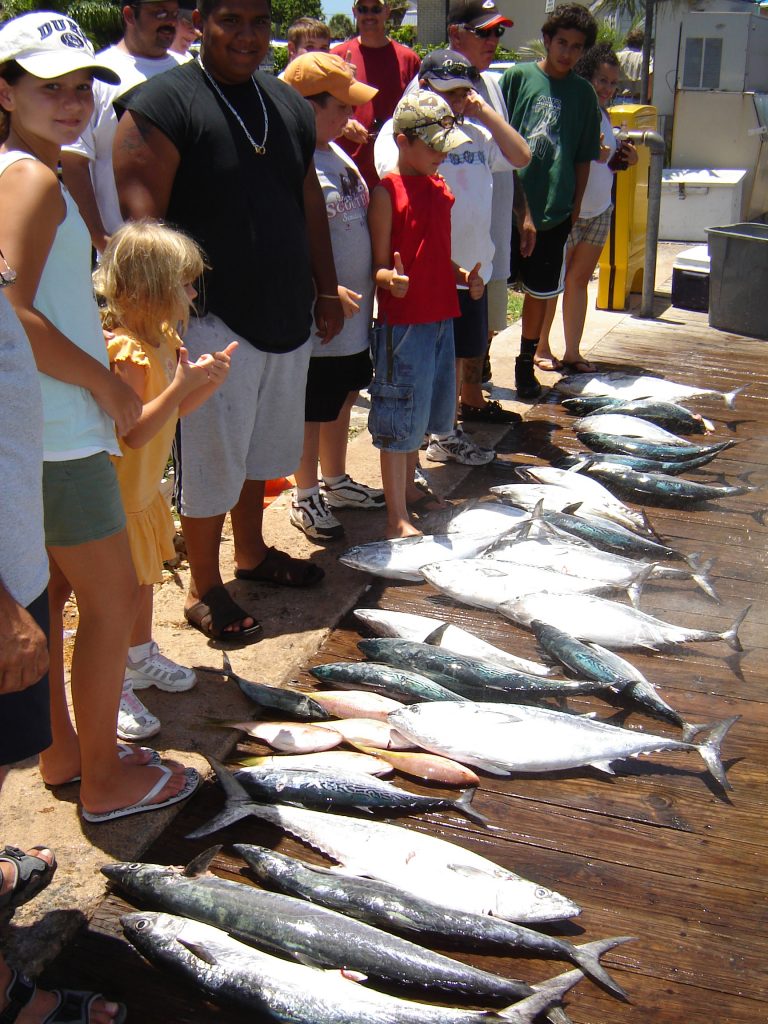 What a weekend.  Lots of action, lots of fish, lots to tell.  It was a great weekend fishing in Ft. Lauderdale this week.  The Catch My Drift took out Boy Scout Troop 406 yesterday on their open boat morning trip.  The boys did pretty good catching some big bonitos, but their chaperones,  Diana Acierno and Bob Peyton caught a couple LARGE kingfish.  The bigger one,  caught by Diana was 39  pounds and the other caught by Bob was a 24 pounder.  Drift fishing was good in Ft. Lauderdale this week.  Those were the biggest 2 kings of the weekend, although many more average sized ones were caught.  Lots of bonitos too.  The night trips on the drift boat had a great couple days anchor fishing in Ft. Lauderdale and have been catching a lot of yellowtail and mangrove snappers.  No muttons this weekend, but they usually have a week or so in August or September where they spawn and bite really good.  I remember last year we had a week or so when we were catching over 70 muttons a trip on our night anchor trips. 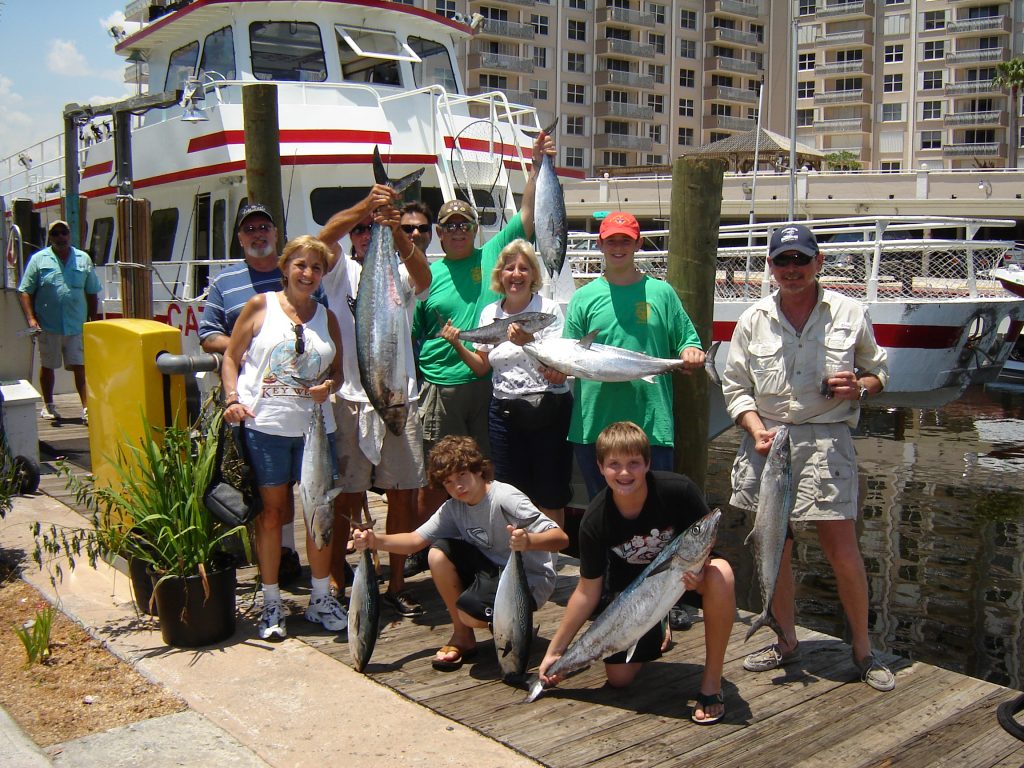 Nice catch of fish on our party boat charter with the Boy Scouts, troop 407

The sportfishing boats had a good weekend too.  A couple of good catches.  Capt. Erik gets the prize this weekend with a 65 pound cobia he caught bottom fishing on one of the shipwrecks off Pompano beach.  Just as most cobias do, this one did more fighting once he got in the boat  than when he was on the line.  We got the bite on the shipwreck while dropping a live blue runner.  The boat pulled ahead to pull the fish out of the wreck like we normally do, and the fish came right up to the surface.  When a  fish does that, it either means its a small amberjack or a cobia.  Well, the fish swam right up to the boat without much of a fight and John, the mate gaffed him.  As soon as the gaff went in him, the fish went ballistic thrashing every which way but loose.  I gotta give John credit though, cause he held on.  And right when I thought he was going to let go and loose the fish, he yoked him over the side and got him in.  But the fight didn’t end there.  The fish knocked everything that wasn’t bolted down to the cockpit floor everywhere.  John took more than a few good whacks to the shin.  Capt. Erik ran down the ladder and whacked the cobia in the head to kill it.  An awesome fish and the guys that caught it got some great dinners off that one. 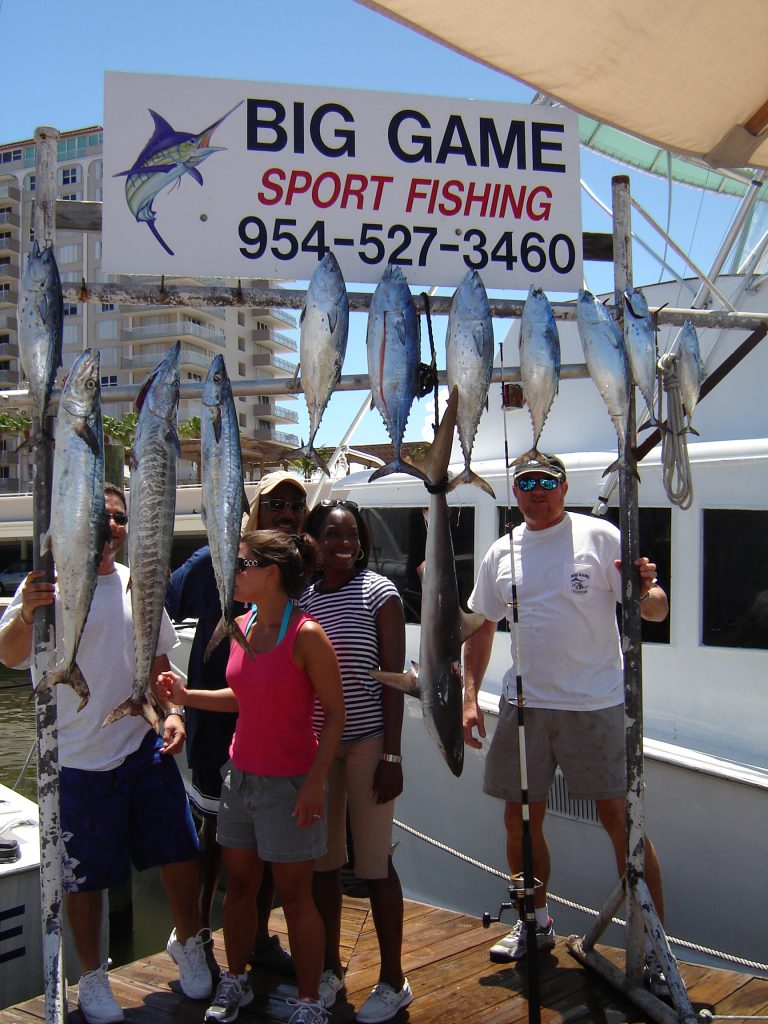 The kings were biting really good today.  We caught our limit on kingfish this morning on our charter and then went to hit the wrecks.  The kings were pretty nice sized.  Most were 4-8 pounders, but a couple probably weighed 10-12 pounds.  On the wrecks we caught one nice snowy grouper, an almaco and a vermillion snapper.  Only had time for a few drops but we got a few.  The charter was the owner of the Pelican Beach Resort, one of the hotels here on the beach in Ft. Lauderdale.  If your looking for a nice place to stay while your down in Fort Lauderdale, they’ve got a beautiful hotel right on the beach and near everything you’d want to do while your here.  Its a nice place to stay, check it out. 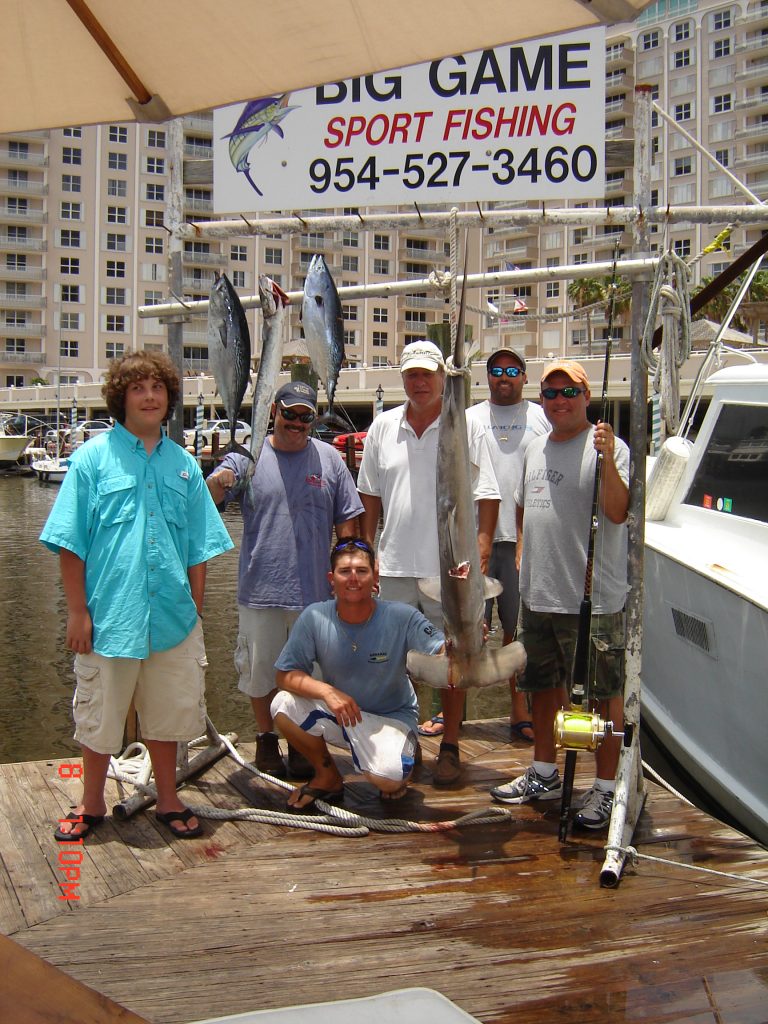 Nice fishing trip for this family out of Fort Lauderdale.

Thanks everyone who fished with us this weekend, hope you all had a great time and come back fishing with us when your back in sunny ole’ Fort Lauderdale.  Cya all tommorrow, this week looks like it’ll be some good fishing.