Well guys, the summer time action is still in full swing.  Lots of bonitos and kingfish are biting on the reef.  Our average has been like 20 bonitos per trip.  Bonitos aren’t the best eating fish, but we use them for strips, chum and shark baits.  Quite a few kingfish though, most of them in the 6-10 pound range, although we have been catching a 20 pounder here and there.  Every day something or other that is odd jumps on the line also.  Yesterday we caught a nice wahoo, 20 pounder or so.  The day before that we caught a decent sized blackfin tuna.  All in all it has been some really good fishing. 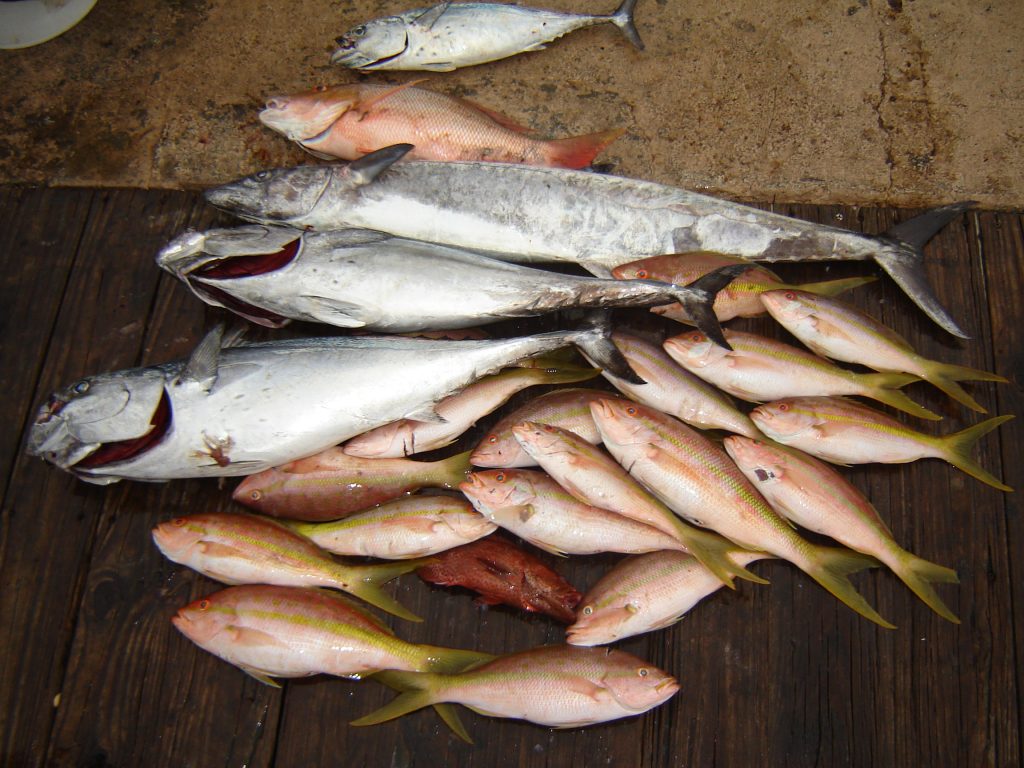 Our sportfishing boats have been catching mostly the same as the drift boats.  Bonitos and kings with the occassional odd-ball fish here or there.  The reef trolling has been so good, we haven’t really tried much else.  Like my dad always told me, never leave fish to find fish.  The sportfishing boats have actually been catching a few big game sharks too.  Big bull sharks and a couple hammerheads have been landed this week.  On our sportfishing trips we’ve been trolling for a couple hours, loading the boat up with fish and bending the rods for everyone…  and then going to either the shipwrecks to fish for barracuda and amberjacks, or soaking the big baits out deep for a big shark or something.  Its been going good. 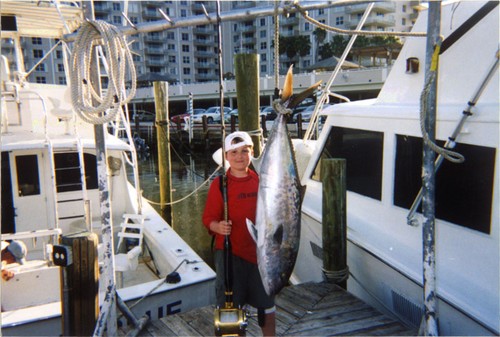 Friday night swordfishing was a decent trip this week.  We only had one swordfish bite.  It was a nice one, about a hundred pounder.  We fought him all the way to the boat.  He put up a good fight, a very strong fish.  When he got into harpoon range, just before we could throw the harpoon, he shook his tail and took a deep dive.  Ended up cutting us off on the bottom of the boat.  That was the only swordfish bite we had that night.  We also caught a cuban night shark on the trip.  My buddy “Doc” was out fishing that night also, drifting right next to where we set the lines.  He caught one swordfish, that he said was tiny, maybe a 20 pounder that he released.  It was a slow night, but there are some swordfish around guys.  We’re going out tonight on another private swordfish charter and I expect it to be good fishing.  Friday night trip still has some open seats if anyone wants to come.

There is a huge air craft carrier anchored off the Ft. Lauderdale beach right now.  We’ve been fishing around it(well as close as we can get to it without them running us off).  Its an amazing sight and we’ve been getting some cool pictures with it.  A few of our charters have been the crew of the boat.  They are just back from Iraq and are coming home, which is good to hear.  To all the men and women in the armed forces overseas, keep up the good work.  We’re proud of ya all.  Thanks, and see ya tommorrow.