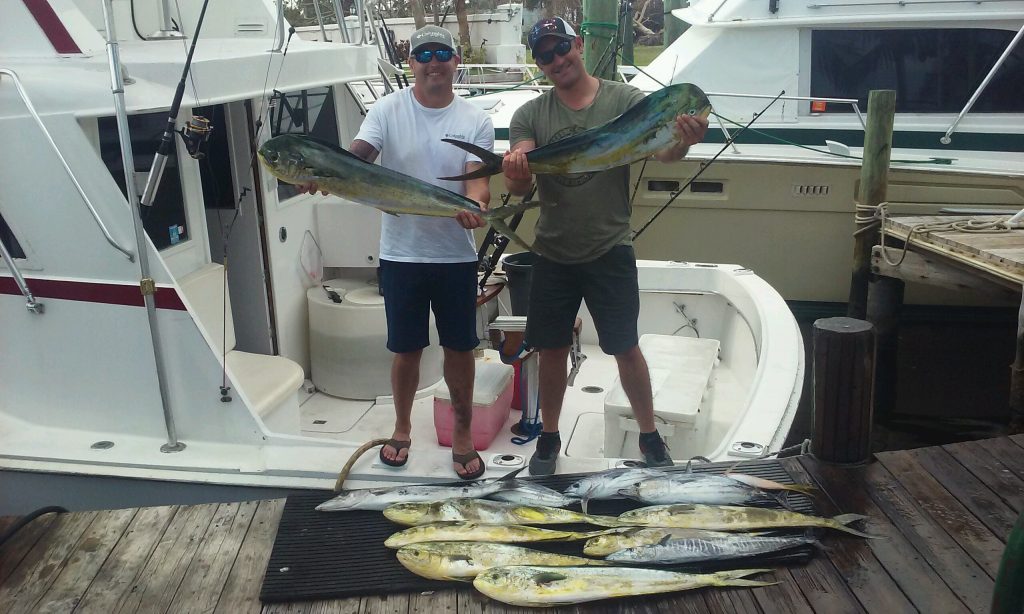 Nice catch of dolphin and wahoo on our Ft Lauderdale sportfishing charter.

What awesome fishing we’re having in Fort Lauderdale this week.  The action is great after a storm like we’ve just had.  Lots of debris in the water, very few boats out there fishing and lots of fish in the water.  This week, dolphin are the hot ticket.  Mahi-mahi dolphin are biting really good out there.  We’re hitting them in the 250-350ft of water range, which is the inside edge of the Gulfstream, just outside the reef.  If they aren’t there, they are also being found along the first weedline as you head offshore, usually another mile or so further out in 500-600ft of water.  We’ve had some great trips this week where we’ve just nailed the dolphin.  I attribute this to the greater concentration of logs, tree branches and other debris floating it’s way northward from the south Caribbean after the storms that have just moved through.  It makes for excellent fishing conditions. 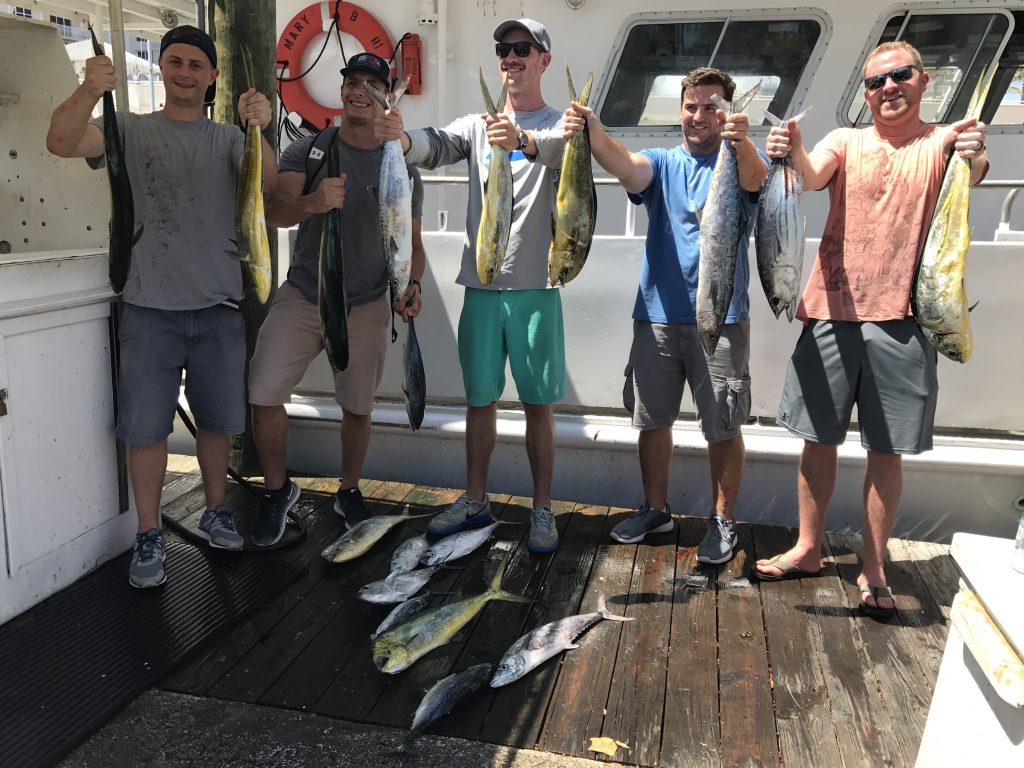 Nice catch of dolphins, kingfish and tunas for this bachelor party fishing trip.

When you find debris floating offshore, dolphin may be your first thought but don’t overlook the possibility of wahoo, sharks or blackfin tunas circling below.  It’s good to pull a deep bait past the floater a few passes to see if anything is lurking down deep.   You might get lucky and pickup a wahoo for your effort.  Wahoo are the fastest fish in the ocean and they don’t shy away from a fast-pulled bait.  In fact, it seems that the faster the bait, the more aggressive the bite.  September and October are awesome months for wahoo, especially on the days surrounding the full and new moons.  They love the strong tidal swings that the full and new moon usually produce. 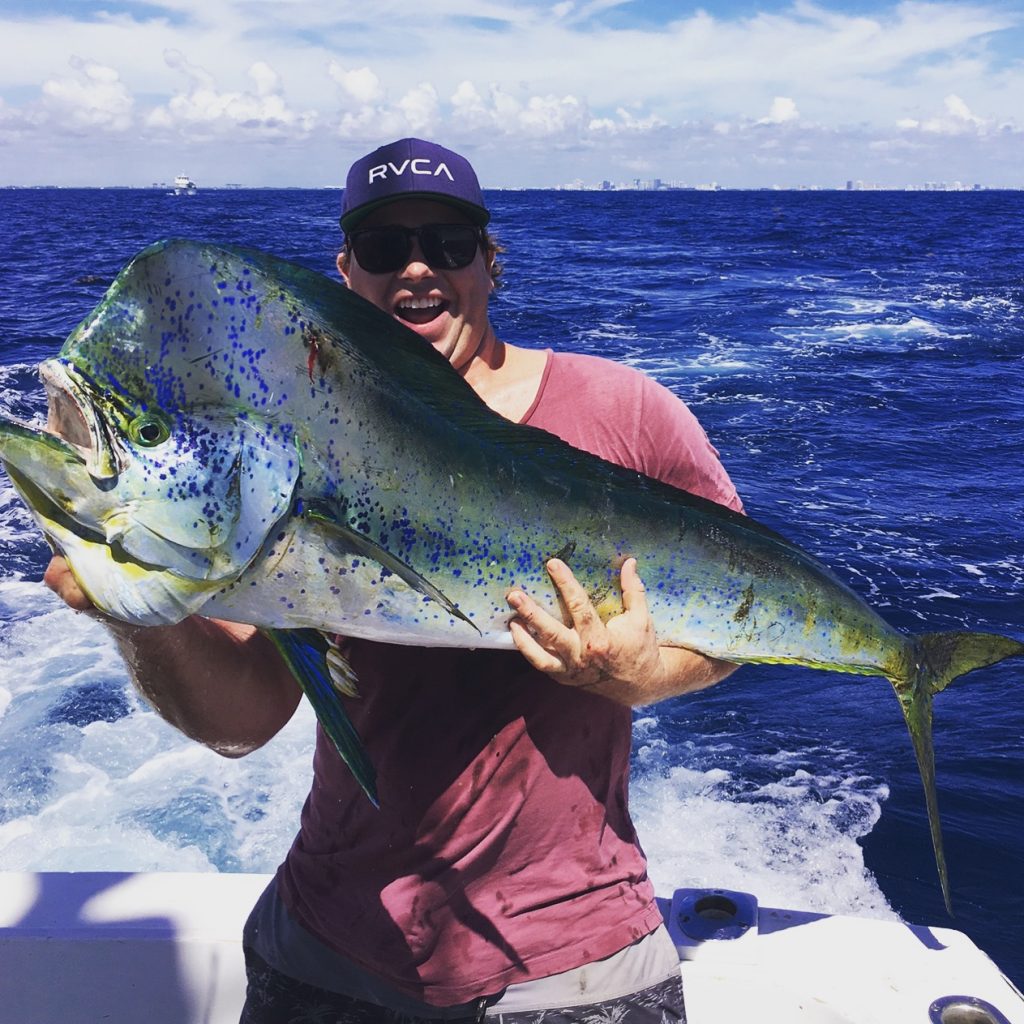 Fishing the reef has also been productive this week.  Lots of king mackerels are biting in 100-120ft.  Mixed in with them are some bonitos, barracuda and black fin tunas.  All of those species are biting decently well out there right now.  September is a good month because we get the tail end of the summer fish and the beginnings of the autumn fish.  It’s a transition month where a lot of different species are present and anything can happen.  Depending on the amount of wind out there, you may see us trolling lures and rigged baits or you might see us live baiting either out of the outriggers or the kites.  Coming soon, when the wind is up, we will be mostly kite fishing with live baits for the majority of our fishing trips. 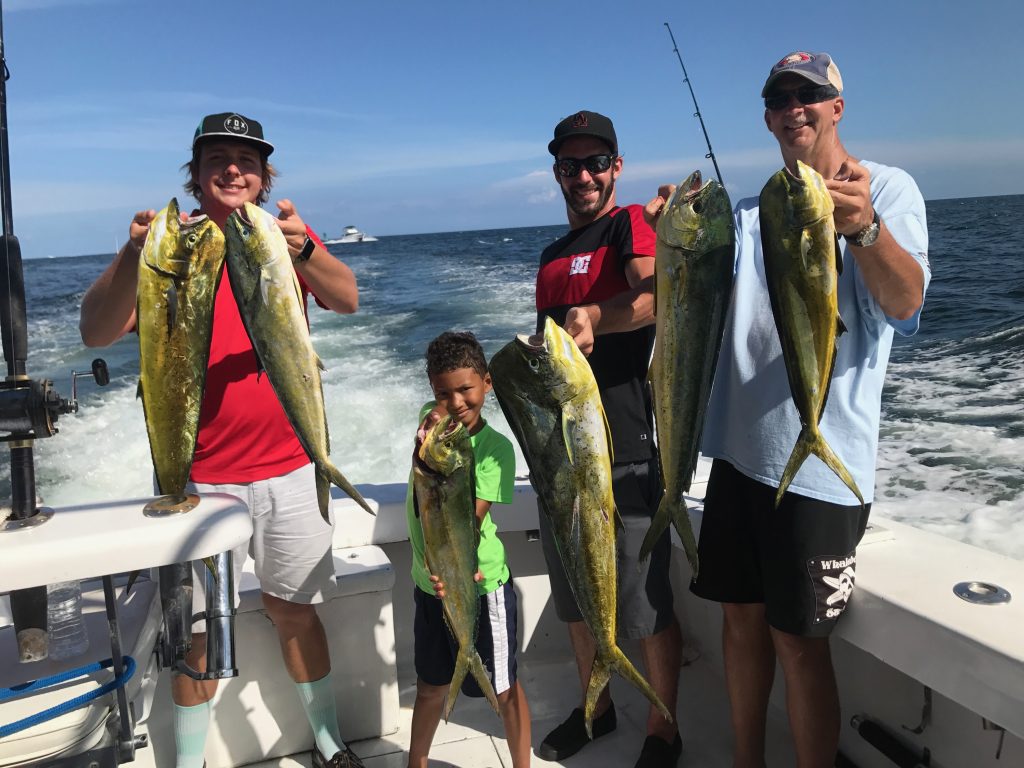 Nice dolphin catch for these guys on our sportfishing charter.

Spring is the best season of the year for wreck fishing, but that doesn’t mean you can’t fish them in the summer and autumn months.  Amberjacks are still around and biting.  It’s kind of late in the year for them and there aren’t as many here now as there are in the Spring, but they are a definite possibility to catch if you drop a live bait down to the bottom.  With less competition for food, amberjacks aren’t as aggressive as they are in March-May.  They may let a bait sit on the bottom and squirm for a while before meandering over to it and eating it down.  This gives other fish such as grouper and cobia a chance to get the bait themselves.  We catch a lot higher percentage of groupers and cobia this time of than we normally do. 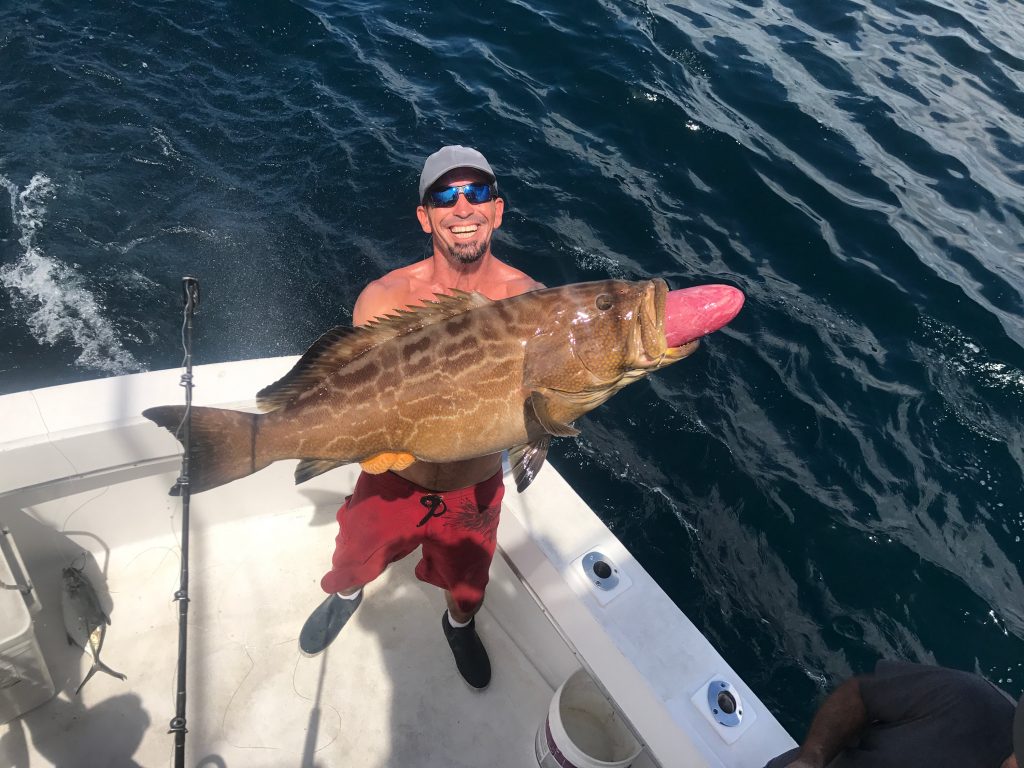 Lastly, I want to talk about the mullet run.  The mullet run is an annual phenomenon in Fort Lauderdale.  It happens in September and October.  It is a huge movement of baitfish along our coast.  Mullet, mostly smaller ones known as ‘finger mullet’, fill the entire Port Everglades inlet as well as much of the Intracoastal waterway.  You will find them up and down every canal that tees off the Intracoastal and the New River.  Mullet are edible but very strong in flavor.  Their value is in the food supply they provide to the gamefish of our area and we also like to use them as bait.  Mullet work well as a rigged bait when they are dead and also as a live bait.  They are one of the few baits that survive well when used in the kite fishing technique.  Not many baitfish are hardy enough to live long when suspended from the kites, but mullet are a strong, hearty baitfish and they have good stamina.  This makes them the ideal baitfish to use for sailfish, dolphin, tuna and sharks this time of year when the winds are up. 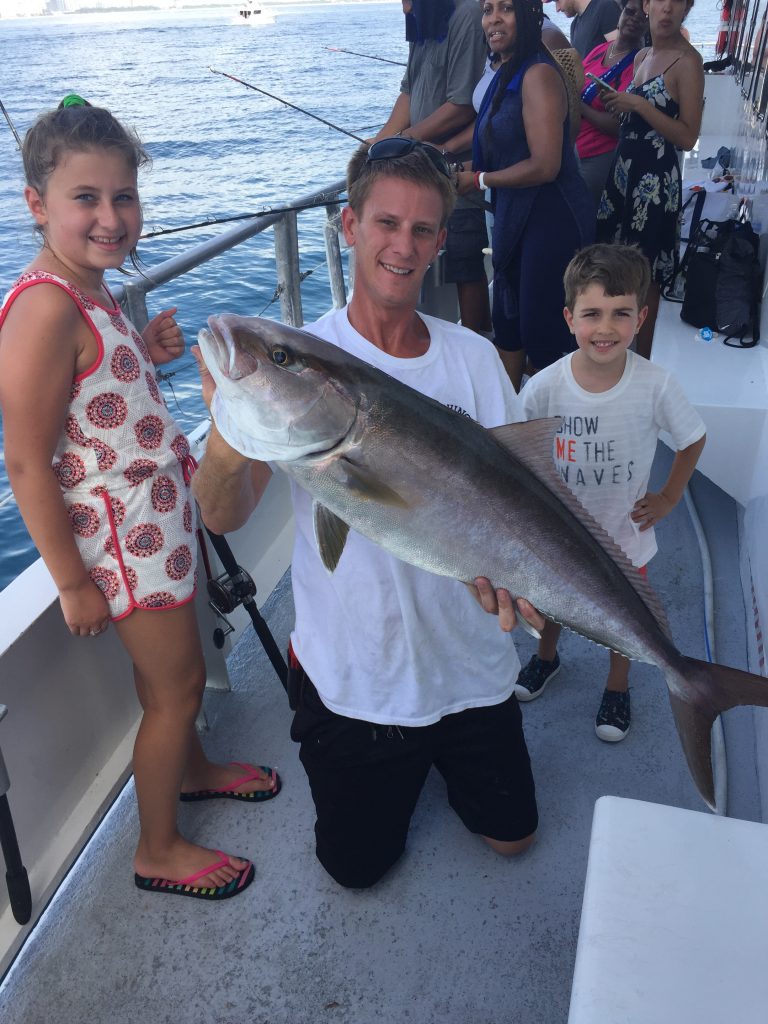 Big amberjack caught by these kids on our drift fishing trip aboard the Catch My Drift.

Great fishing this month as we transition from the scorching hot summer months to the breezier, less humid and much cooler autumn months.  Good luck to all those fishing with us over the next few weeks.  I’ll sea ya on the water. 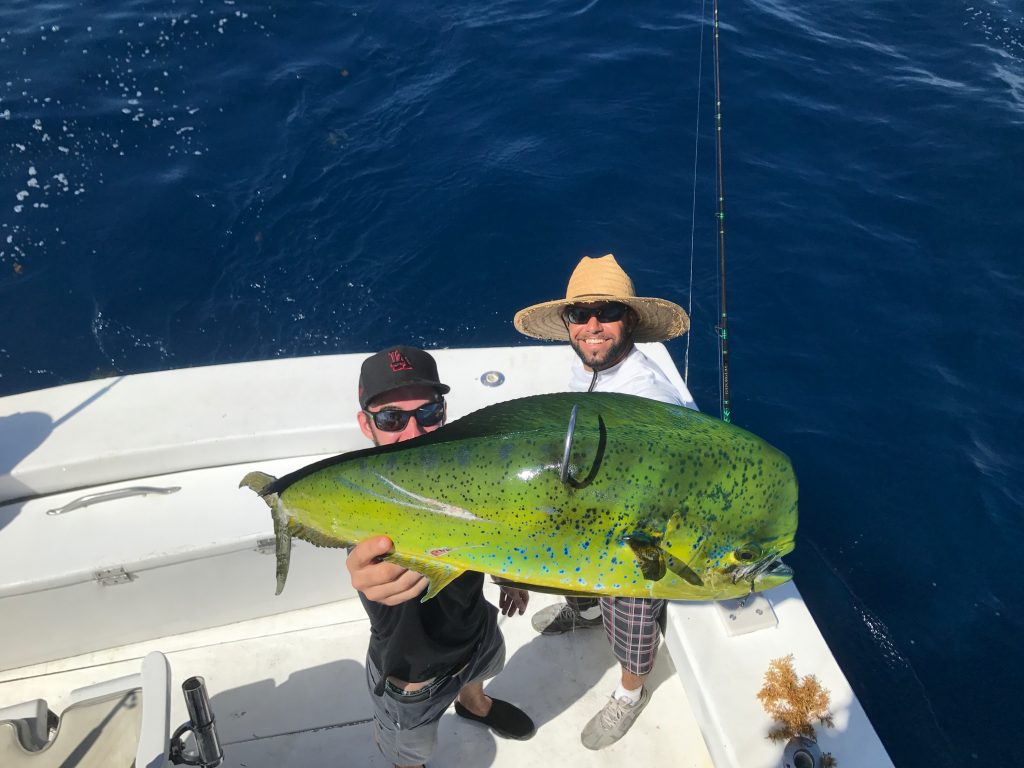 Nice dolphin on the gaff, just caught on the sportfishing boat.