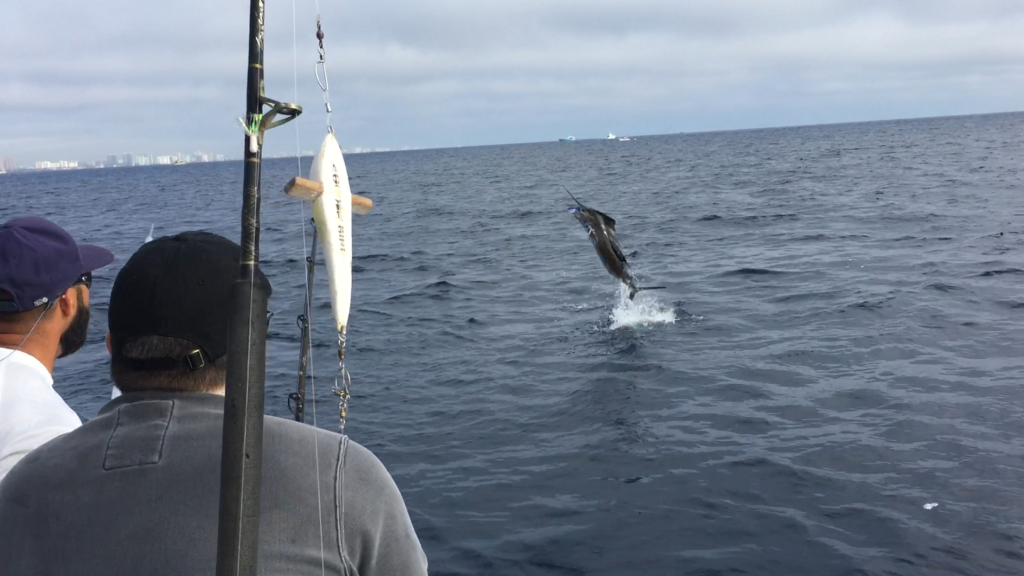 A sailfish in all it’s majesty, jumping behind the boat. This is why I love Sportfishing.

The fishing off Fort Lauderdale is awesome this month.  Just about everything is biting.  We’re into our best season of the year for fishing… March, April and May.  These 3 months are far and away the best time of the year to fish offshore of the Fort Lauderdale coast.  Tunas are everywhere, dolphins are showing up, some sailfish are biting, a random wahoo is caught here and there, big fish around the shipwrecks and the shark season is beginning.  This is the time of year us Fort Lauderdale fishermen wait for. 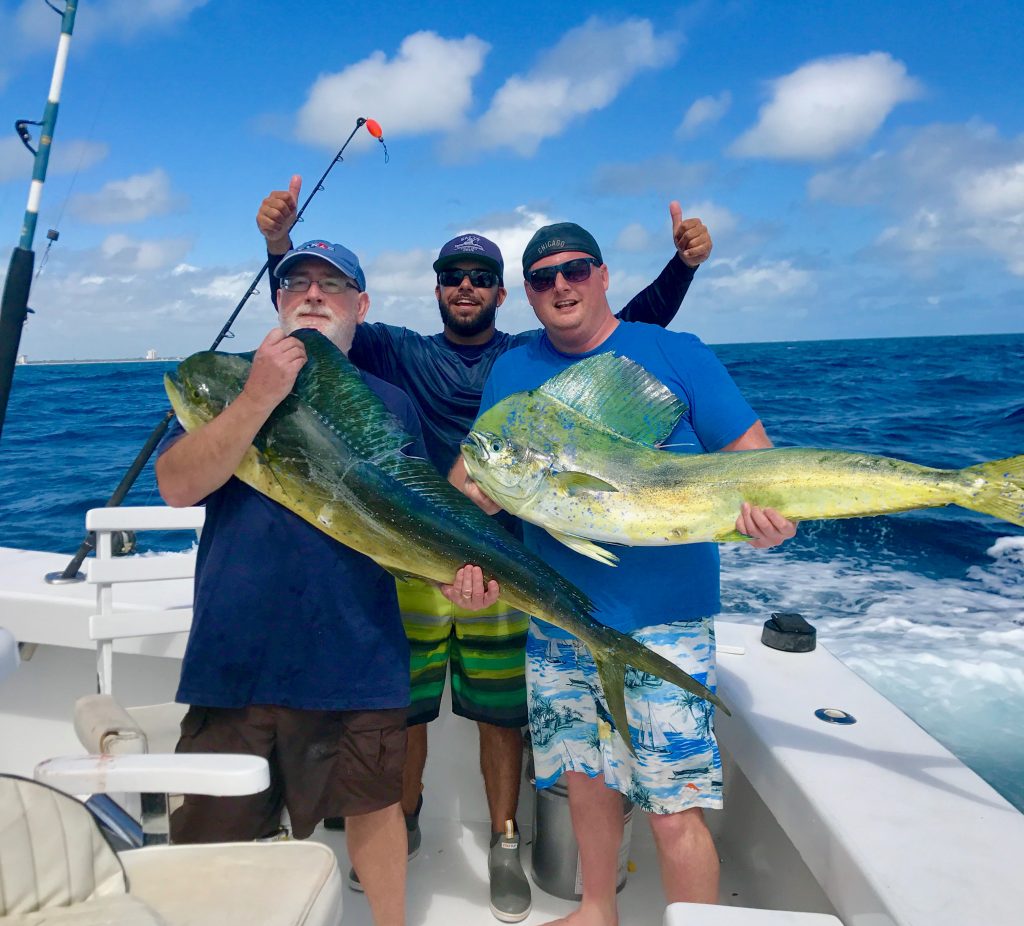 Beautiful pic a some nice dolphins caught on our sportfishing charter.

Dolphin.  The dolphin bite is getting good.  Yesterday, we caught a pair of 20+ pounders fishing in just 300ft of water, just outside the reef.  We were kite fishing and both fish came up on the kite and were fighting over the same bait.  We hooked one and pitch baited the other.  The dolphin come in close this time of year to spawn and some of them are really, really big.  A lot of them are 20+ pounders, some of the biggest dolphin we catch all year.  The strong East winds blow them in and get them chewing.  The strong East winds we’re about to get this weekend is going to get them biting like mad.  Dolphin LOVE a strong East wind.  It makes the ocean rough… really rough, but it’s great for fishing.  The general rule out of Fort Lauderdale is the worse the weather, the better the fishing.  I can’t wait to do some dolphin fishing on Saturday and Sunday this weekend, I bet it goes off! 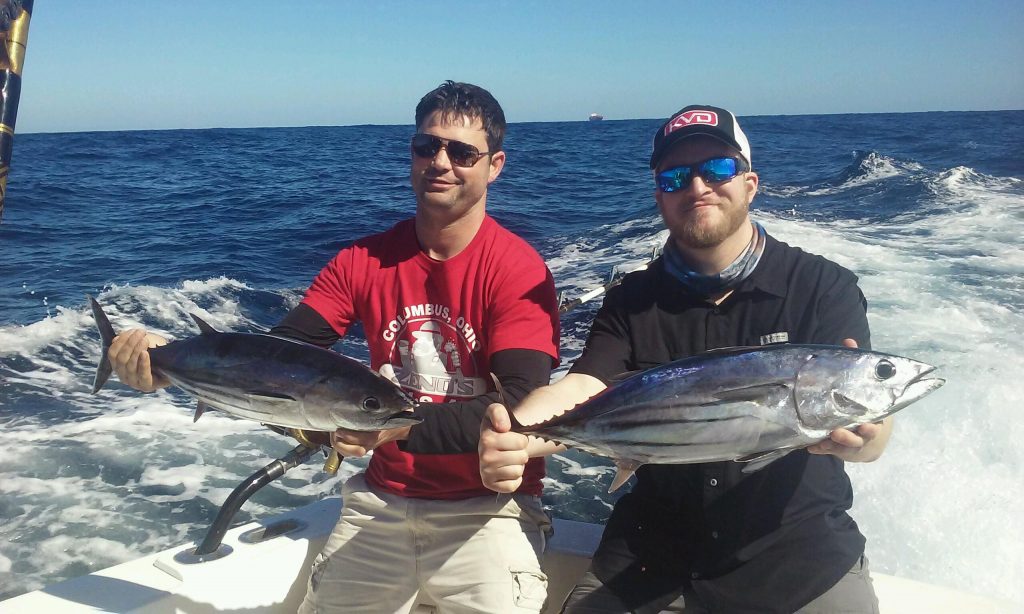 Tunas.  Tunas are biting all over the reefs.  They are very numerous and you can catch them very easily.  Just troll some small, streamline baits up and down the reefs and you’re bound to catch them.  You will see the big schools of them pop up on the surface, busting minnows and other small baitfish.  Sometimes the schools are so large, it’s the size of a whole football field.  They spook when you get too close, so it’s best to stay along the edges of the school rather than drive right through them and drive them deep.  You can fish along a school and pick off tunas from it all day long sometimes.  Most of the tunas are smaller, the size of a football, but there is no size limit on them.  Also, there are sometimes a few big tunas mixed into the school as well, as well as larger predator fish following the schools and picking off the slower tunas. 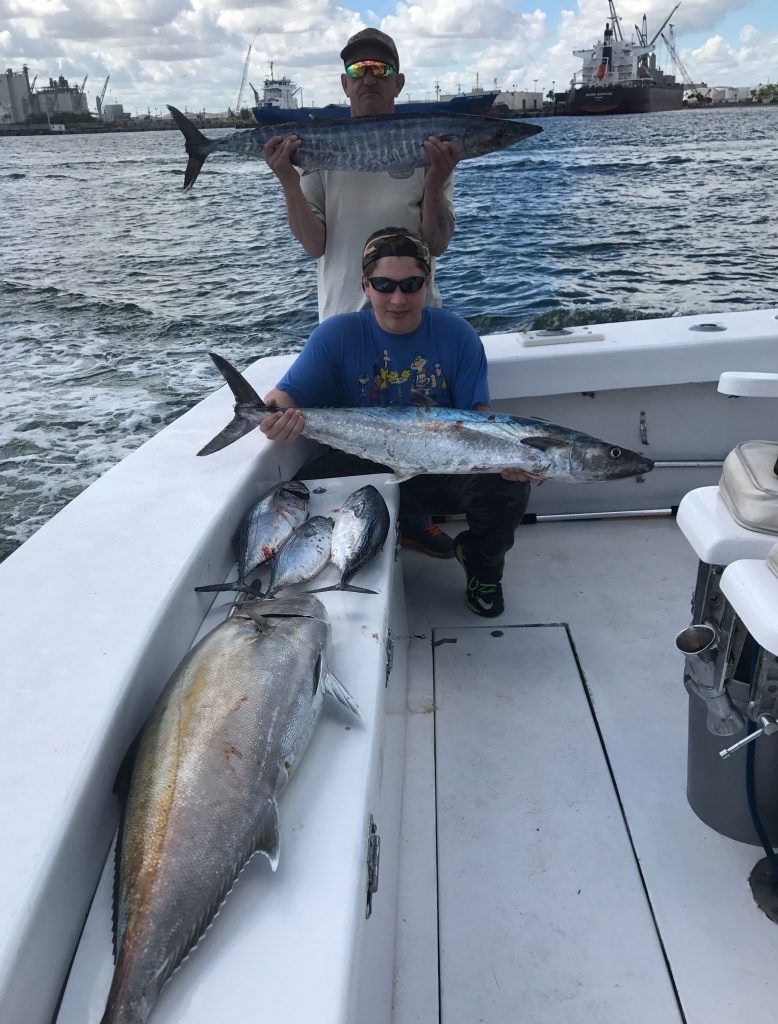 Nice catch if wahoo, kingfish and amberjack on a sportfishing charter out of Ft Lauderdale.

Wahoo.  Wahoo can be caught anytime you are trolling the reef in 100+ ft of water.  They always bite when you least expect it.  Wahoo will bite a surface or a deep bait, but most often they prefer the deeper baits on a the planers or on a deep trolling lead bait.  Double hooked ballyhoo work awesome for them, as do the good ole’ trusty spoon.  Dark colored sea witches work well on bright sunny days and bright colored sea witches work well on darker, cloudy days.  I love to troll just in front of an approaching storm for wahoo.  Something about that falling barometer that really gets them turned on.  Also, the moons have a big effect on wahoo.  Not so much the moons as the tides the moon creates.  The full and new moons have the largest tidal changes associated with them and wahoo bite best on the outgoing tide.  The like to pick off the baitfish as they are being carried outside the reef by the changing tides.  It’s a smart predator move to hunt along the outside edge of the reef on the outgoing tide.  Some big wahoos will be caught this month, several big ones were caught already this week. 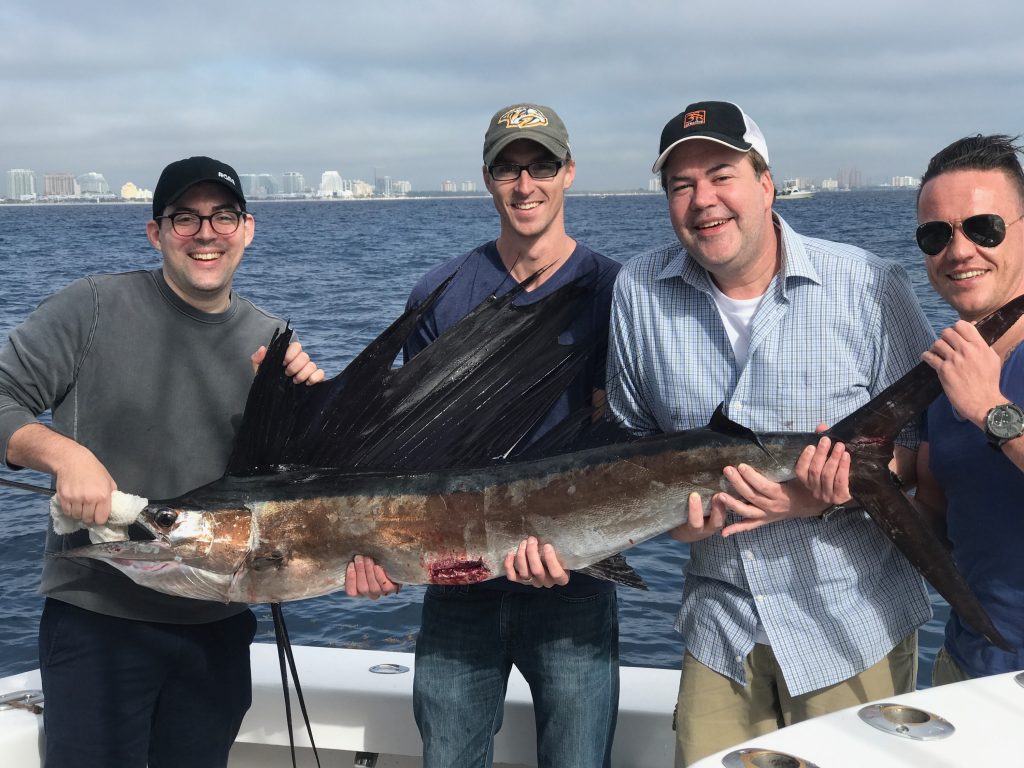 Sailfish.  Sailfishing season is coming to an end, but last year the bite was pretty good throughout the Spring.  Traditionally, the winter is the best time of year to catch sailfish, but last year we had good sailfishing right into the later parts of May.  Will this year be a repeat of last years good Spring sailfishing?  I think it might.  The sailfish bite has picked up this week with a few days of multiple sailfish caught on a single trip.  I bet we catch a lot of sailfish over the course of the next couple months.  The fishing is changing in Fort Lauderdale and every year is a little different than the last.  Fish are early or sometimes hang late.  The migrations, although they tend to follow the same patterns year after year, sometimes change a little from year to year.  I think the sailfish bite is late this year, like it was last year.  We’ll have to wait to see, but expect to see some nice sailfish pics in the weeks to come. 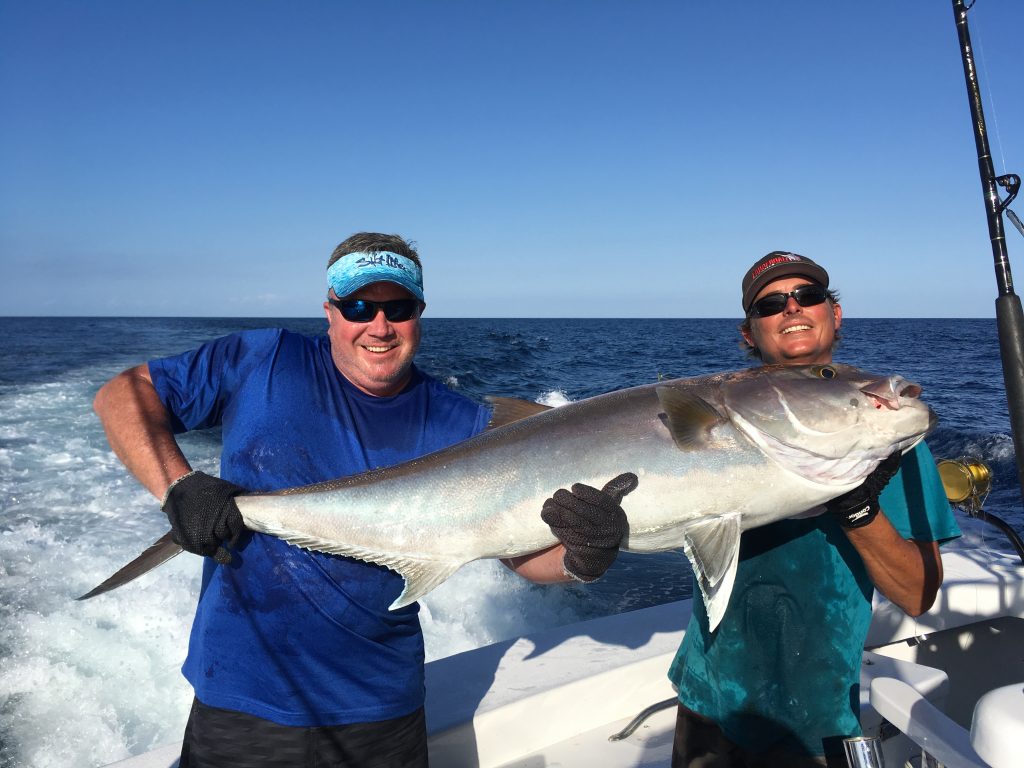 Bottom fish.  The wreck fishing goes off this time of year.  There are groupers, amberjacks, cobia, barracuda and sharks hanging around the wrecks.  Why?  Because that’s where the easy meals are.  Wrecks hold baitfish and small game fish.  They congregate around the wrecks because they eat the corals, algae and minnows that grow on these shipwrecks.  Larger predator fish will naturally come to congregate here too because of the food supply.  It’s all about the food.  Shipwrecks provide a start-of-the-food-chain effect and  become an oasis of activity in the Spring months.  Amberjacks really make their presence known this time of year as they are very aggressive.  Sometimes the amberjacks are biting so good around the wrecks that you can hardly get a bait to the bottom.  It gets eaten as you are dropping it down.  Groupers are down there too, if you can get the bait past the amberjacks.  Groupers unfortunately are out of season.  They are awesome to catch but you have to throw them back.  Good stock until May, when the season opens on May 1.  I’m going to be killing me some groupers in May!  Cobia, barracuda and sharks also patrol the wrecks, although in lesser numbers.  You never know what you may hook into when fishing live baits around these shipwrecks.  It’s the best technique for quick action on big fish. 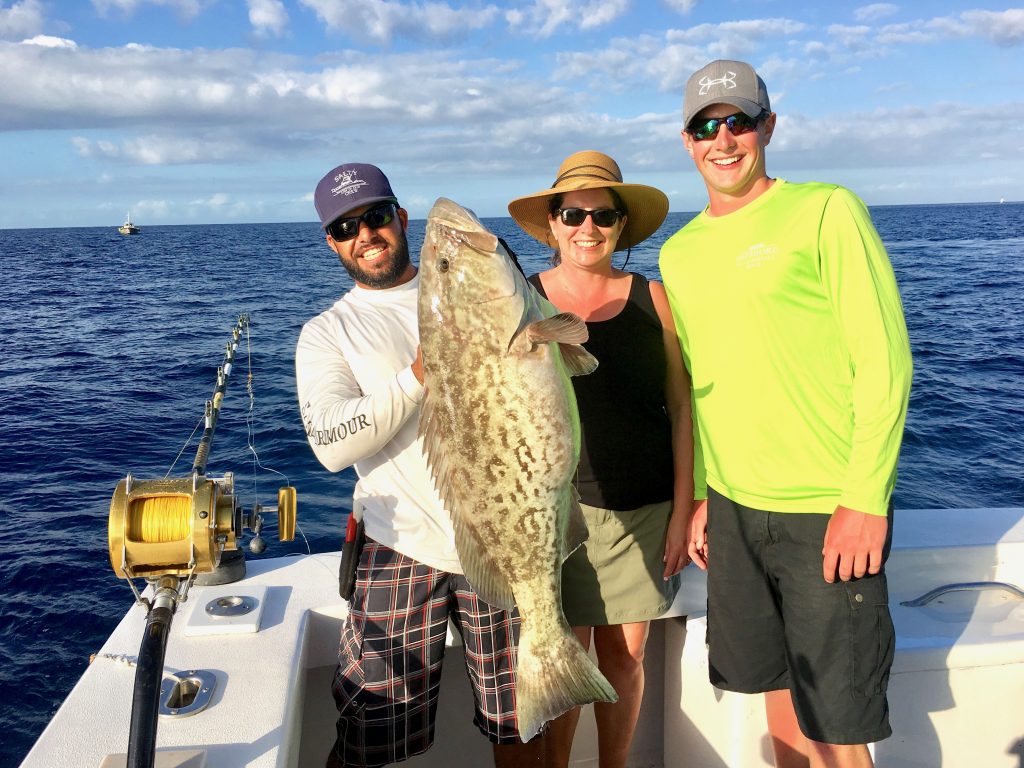 And that’s why I LOVE fishing Fort Lauderdale in Spring.  Good luck to everyone fishing over the next few weeks.  We’re about to get a strong East wind blowing this weekend which should light up the fishing for us.  I bet there are some big fish caught over the next week, prizes for the anglers who brave the rough seas.  Don’t let the rough waters scare you.  All the best fish are caught when it’s choppy.  Tight Lines and I’ll sea ya on the water! 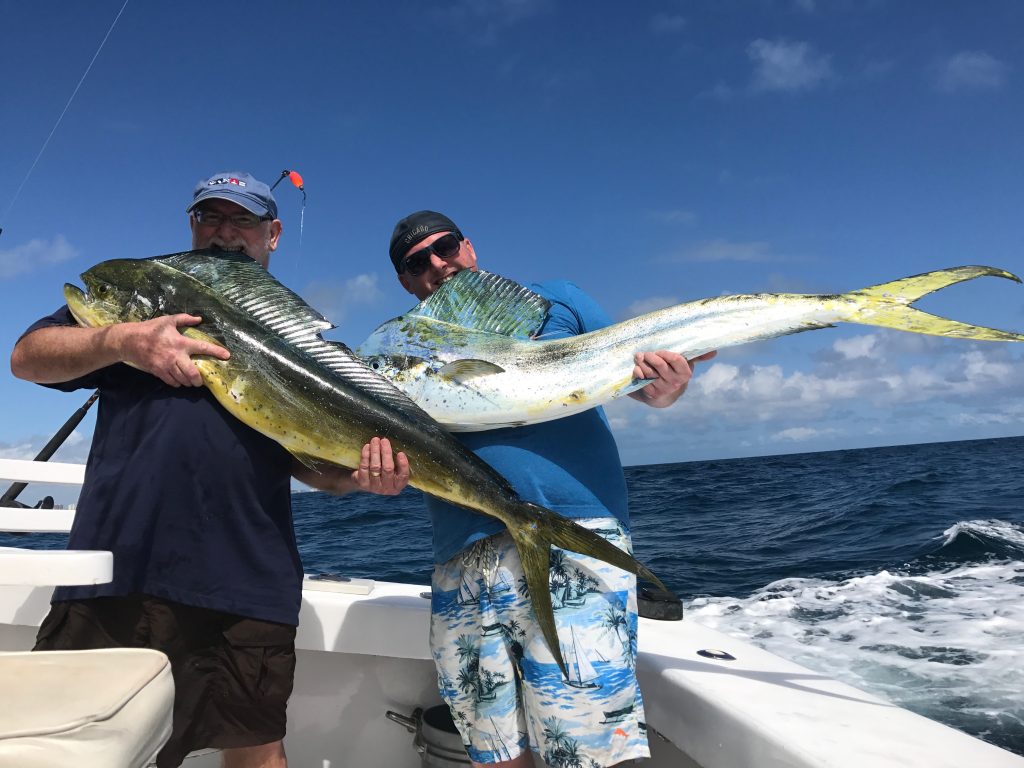 These guys tried to eat their dolphin before we got in from the trip.