Loads of Fish, Lots of Action on the Ft Lauderdale Reef 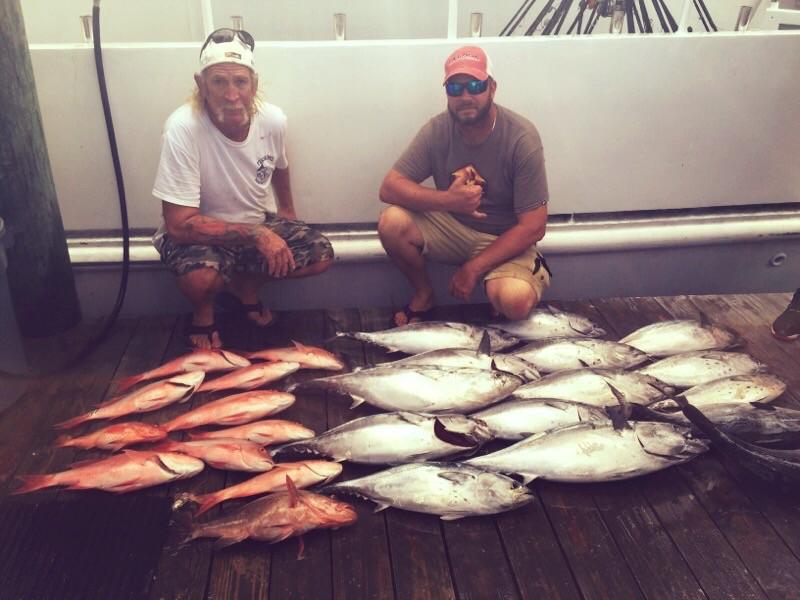 Nice catch of snappers and bonitos on our drift fishing trip.

Great action this week on the Fort Lauderdale reef.  Bonitos, a gamefish species of tuna (non-edible) are solid on our reefs right now as they are embarking on their annual migration down our coastline.  Bonitos are in the tuna family and are one of the strongest fish pound for pound in the ocean.  Every summer, hundreds of thousands of bonitos make their way northward along our reefs, feeding on the plenitude of small baitfishes.  This annual event gets the action on our reefs HOT and creates the best fishing season for general action in south Florida.  Lots of other pelagic fish species migrate among the bonitos, taking full advantage of the school’s protection and hunting advantages. 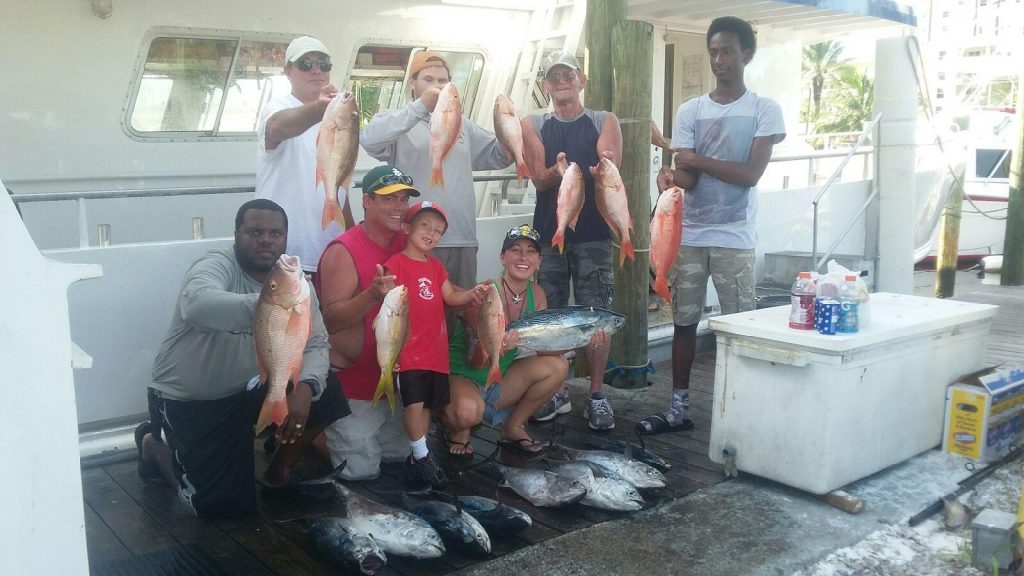 Our drift fishing trips are getting into the snappers, bonitos and kingfish pretty good.  Afternoon trips have been slightly better than the mornings as the low pressure of the afternoon passing showers gets the fish biting.  Mangrove and mutton snappers are biting extremely well this week. Maybe it is just a fluke, but better than average numbers of the bigger snappers are being caught on our drift boat this week.  For bigger game fishermen, instead of the standard bottom fishing rig, ask the mate to rig you up with the kingfish rig.  This rig is a 3 hook rig where each sequential hook is hooked into the eye of the next and all hooks are put into a larger, whole bait.  This is a good rig for catching kingfish, bonito, blackfin tuna, barracuda and even a possible wahoo.  While you won’t get much action on this rig, at least not as much action as fishing the bottom rig, it gives you the chance to catch a larger pelagic fish.  Some guys call this rig the ‘hero or zero’ rig. 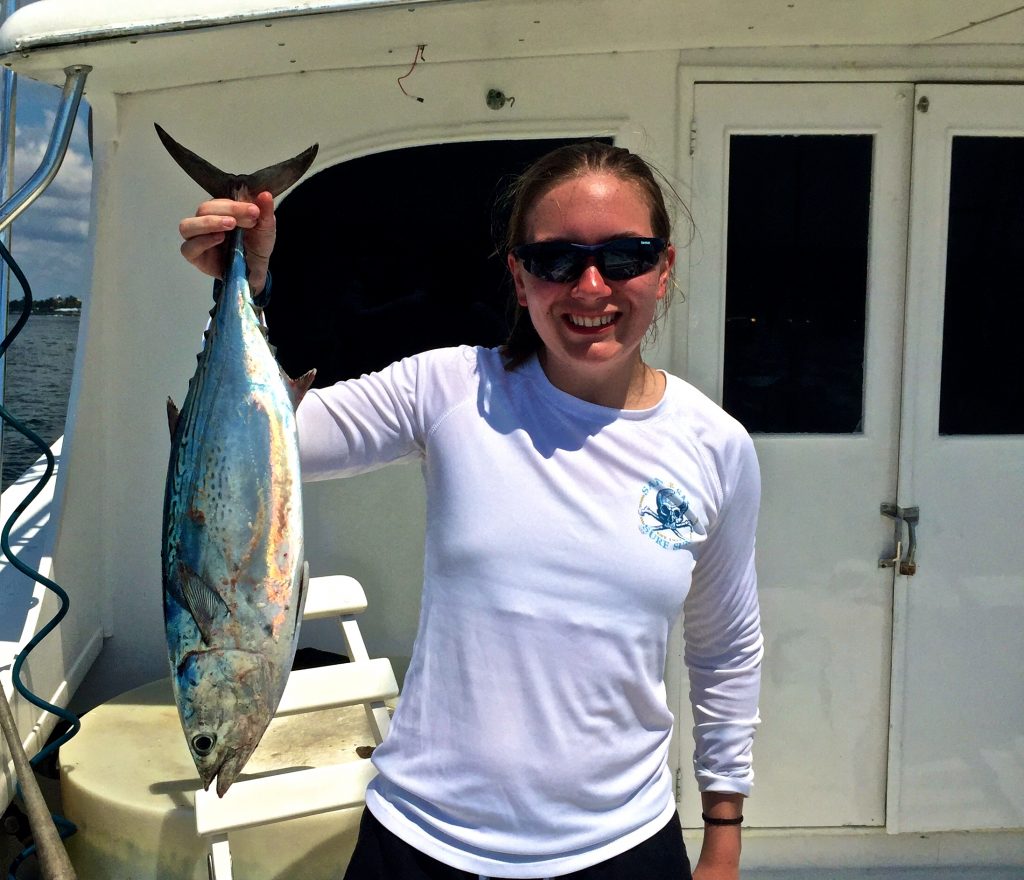 Nice bonito caught on our sportfish trip. Bonitos get all the activity on the reef going this time of year.

Sportfishing action is red hot in Fort Lauderdale this week.  Trolling is the all around best technique for catching fish on the reef.  With the plethora of fish on our reefs this month, the fishing action is off-the-chain.  Bonitos are making up the majority of our catch.  They are biting the best and they are the most aggressive, so we catch them the most.  Bonitos average 10-20 pounds and are one of the strongest fighting fish in the ocean, even on heavy tackle.  Second in line for numbers of fish are kingfish, which are fairly abundant on the reefs this month.  Kingfish are a great eating fish if you are able to eat them fresh.  Kingfish average from 5-20 pounds and the smaller ones make for the best eating.  Blackfin tunas are also abundant on our reefs this month.  Most of the blackfin tunas are smaller fish, about the size of a football.  They do sometimes get big, all the way up to 30+ pounds.  Tunas are so good eating you can even eat them raw!  Wahoo are a longshot possibility this month.  We catch them when we are trolling the reefs and catching bonitos.  When you’re wiring in your fish and you think you’ve hooked into another big bonito, up pops a monster wahoo.  They always bite when you least expect it.  Don’t forget if you catch one, to shout at the top of your lungs, “Waaahooooo!”. 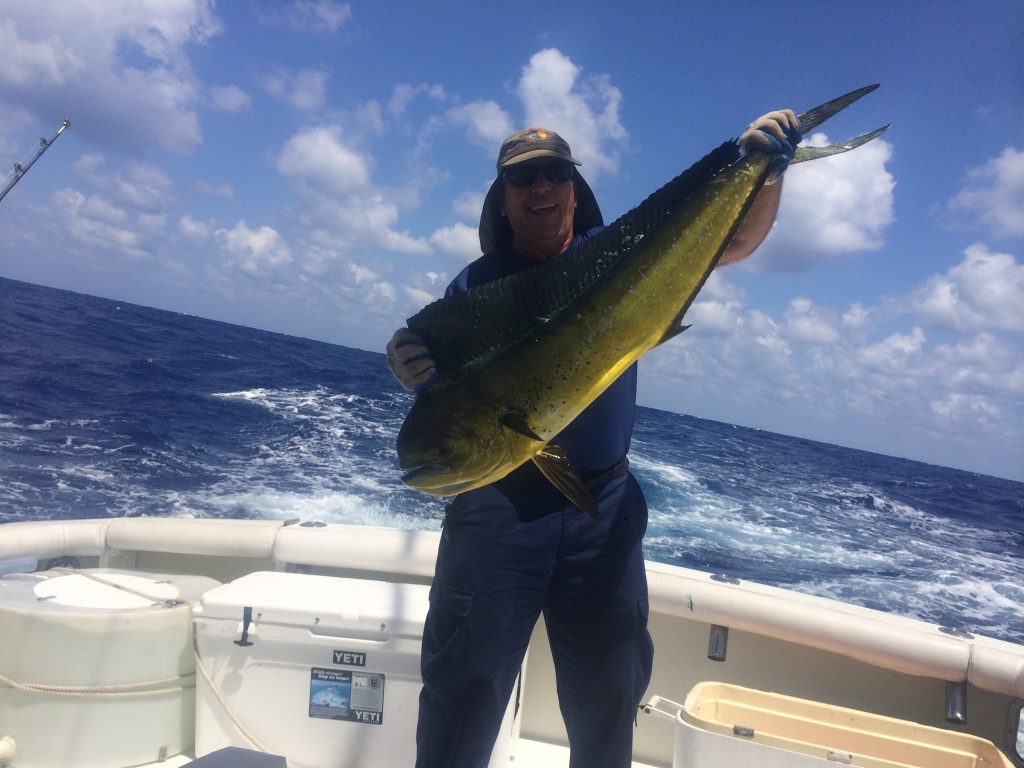 Offshore the dolphin are biting, but they are sporadic.  You have to go looking for them and put in your miles.  Even then, it’s not a sure thing to find them.  Dolphin typically bite between 4-6 miles offshore, but can be as far offshore at 10-15 miles out on some days.  You just have to go out looking for them and hope you find something good to fish along such as a weedline, birds, floating debris, or something.  It’s a big ocean offshore and luck is a much larger percentage than skill when it comes to dolphin fishing.  Even with trolling a full day offshore, success isn’t guaranteed with dolphin.  But you can also find a school of fish in your first 15 minutes of fishing and load your entire fishbox from that one school.  Dolphin will generally eat just about anything you throw at them so, it’s all boat meets fish when fishing for dolphin offshore of Fort Lauderdale. 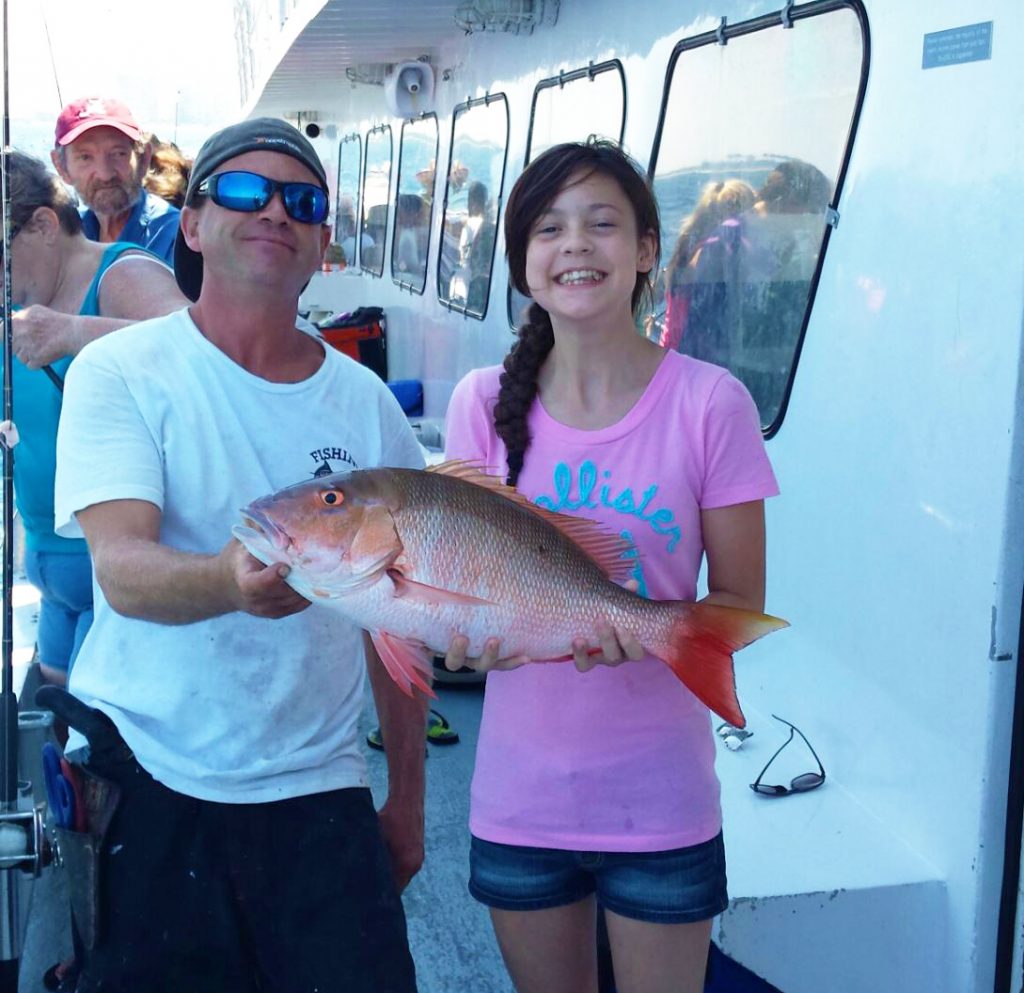 With the sheer amount of fish we’re catching on the reefs of Fort Lauderdale, there’s not much reason to try anything other than drift fishing or trolling.  As my dad always told me, “Never leave fish to go try to find fish”.  Good luck to everyone fishing off Fort Lauderdale this week.  I’ll sea ya on the water. 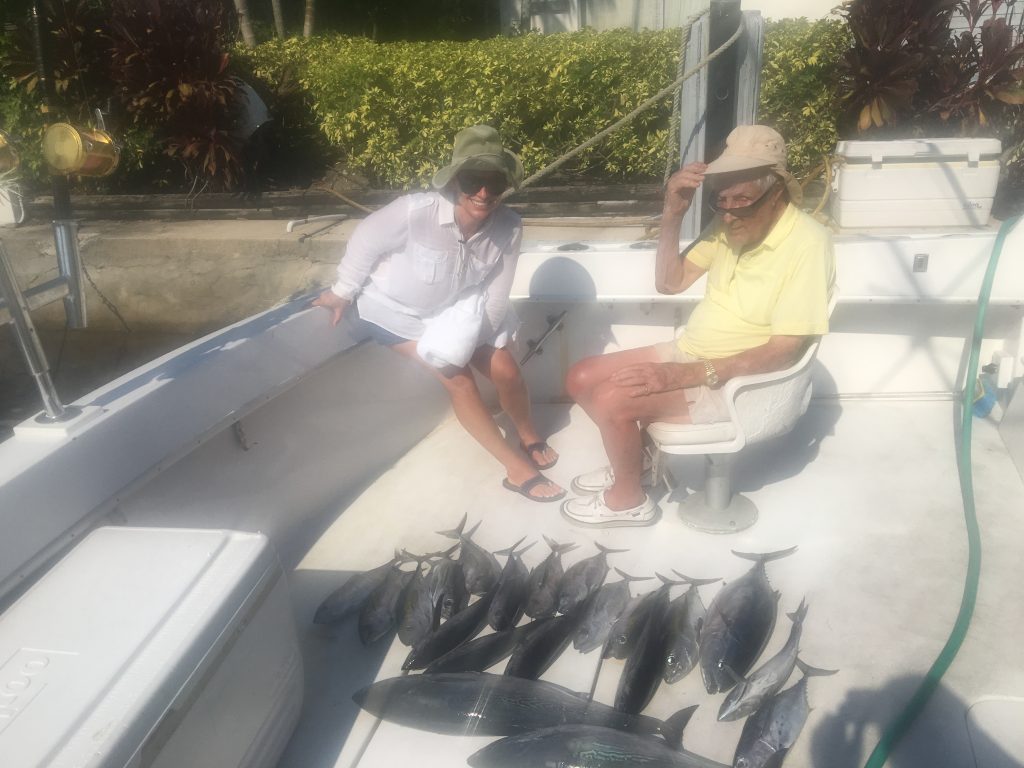 Nice catch with lots of tunas on a sportfishing trip out of Ft Lauderdale.