Awesome Dolphin Fishing Trip on the Mary B III

It was a great day for fishing today on the Mary B III.  The dolphin were snapping in 350-400ft of water today, just a mile and a half off the Fort Lauderdale beach.  The morning trip was good, but the afternoon was even better.  We started the morning drifting on the reef, picking up a few snappers and some other assorted bottom critters (grunts, triggers, porgies).  A few boats just outside of us were catching some scattered mahi-mahi, so we decided to go give that a try.  We went out to 350ft of water and set up on a drift.  We ended up catching 8 mahi-mahi and one lucky angler caught about a 15 pound wahoo, the pool winning fish.  On the afternoon trip, we went directly out to 400ft of water to start the trip.  We picked at some mahi-mahi catching a few.  Trolling is the best way to cover some territory and find more fish.  There weren’t many people on the afternoon trip, so we decided to pick up the baits and try some trolling.  It was a great call by the captain to do this because we started catching fish instantly.  The dolphin were all over the place but scattered.  Every few minutes we hooked into one or two.  We hit one nice school with about 12 fish in it, where every person on the boat had a dolphin on the line at the same time.  One angler had a monster 25 pounder on the line, but ultimately broke him off.  That would have been the biggest one of the day.  The afternoon catch ended up being 32 keeper dolphin, I don’t know how many releases and a few assorted bottom fish that we caught drifting over the reef during the last 1/2 hour of the trip.  There’s some great dolphin action just offshore Fort Lauderdale beach right now.  Last November, we had some incredible dolphin fishing action.  It looks like this year is starting to get rolling too.  This is a great time to come out on a drift fishing trip in Fort Lauderdale.  Let’s go fishing! 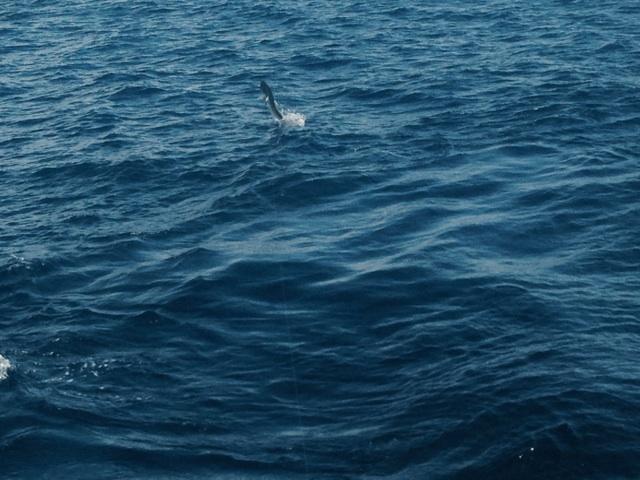 The one that got away- pic of the 25 pounder we busted off. Picture doesn't do the fish justice.