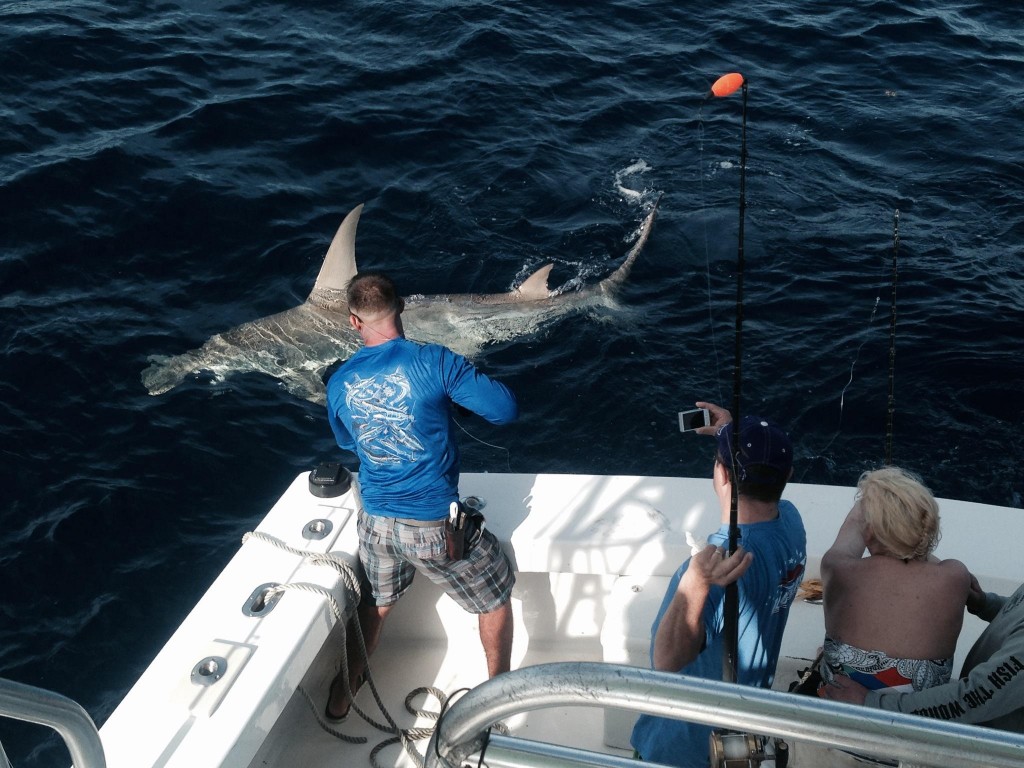 Today we caught a monster hammerhead shark, fishing in 350ft of water off the coast of Fort Lauderdale.  The Out of the Blue, with Capt. Rod at the helm, led the expedition with some folks that wanted to “catch something big!”  With that in mind, we went out to our shark fishing grounds, about a mile and a half off the coast of Fort Lauderdale beach which is about 350ft deep of water.  Bobby, first mate aboard the boat, set the lines including a shark bait on the bottom, a shark bait positioned mid-depth held in place with a balloon, and a couple of baits fished out of our fishing kites (live goggle eyes).  We sat there for about 40 minutes with no action before we got the bite.

The shark hit the bottom bait, our 130 Penn International we had set in the covering board.  On the bite, the rod doubled over and the rod tip nearly touched the water.  Bobby screamed on the bite, “There he is!!  Go Cap’, Go!!!!”.  Rod pulled ahead with the boat hard to set the hook and we got the angler strapped into the fighting chair to fight the fish.  Our angler’s name was Diana January, a gal from Texas, who was going to catch this shark no matter what.  We fought the shark, without seeing him, for almost 2 hours.  Finally, the angler and the shark equally exhausted, we landed the fish.  We got the fish measured and photographed, and ultimately cut the leader on the fish so he could swim away.

We are now fully into the famous shark fishing months off the south Florida coast.  Every year, hundreds of thousands of these APEX predators, swim offshore of our coastline, migrating for food and mating purposes.  They use the Gulfstream current as a sort of “conveyor belt” to maximize their migration efforts and keep them in prime areas for hunting.  We have, over the next few months, some of the best, world-class shark fishing there is to be had on this planet.  If you’re into fishing for and fighting one of the largest and most sought after predators in the sea, book your shark fishing charter with us now.  February through May tend to be the peak months.  Some years, shark season extends all the way into June and July, but you never know.  Thanks for fishing with us Diana, I’m glad you caught yourself a monster!  Good luck to everyone fishing this next week.