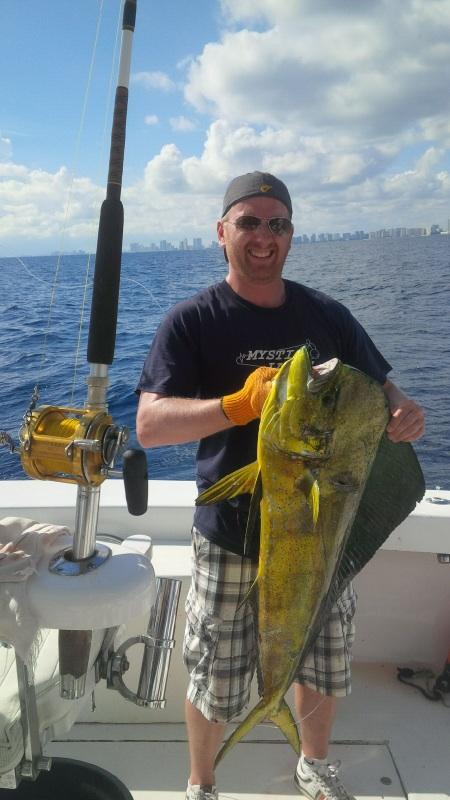 What a great day of fishing in Fort Lauderdale.  There are some cool fishing biting out there.  Today, we had a sportfishing charter aboard the Out of the Blue.  Capt Paulie and Bobby were crew.  We went out to about 300ft of water, where the best dolphin and sailfish has been going on lately.  We set up the kites and put out a spread of goggle eyes and mullet.  We missed a mystery fish that we think was a sailfish, just couldn’t get the hooks into him.  A few minutes later, we had a sailfish come up ‘window shopping’, but he didn’t even take the bait.  Pretty good start, even though we hadn’t caught a fish yet.  We knew we were fishing the right area. 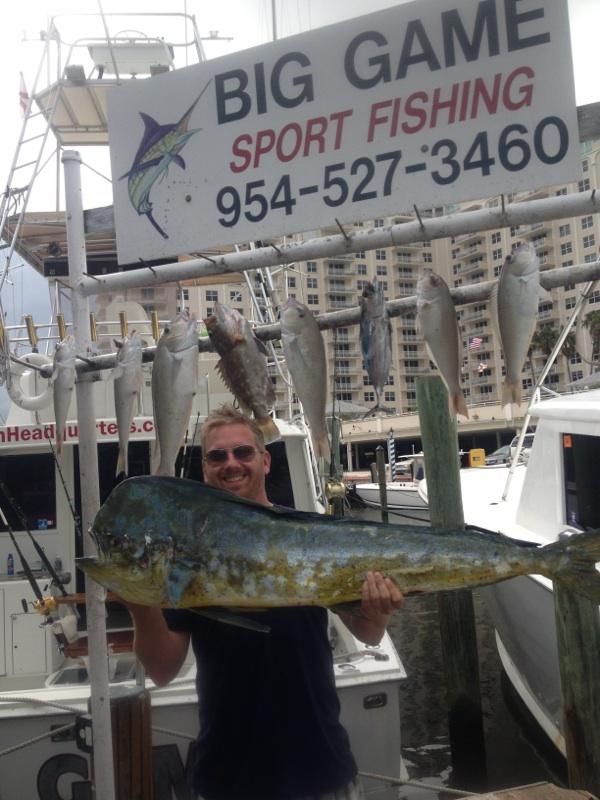 Big bull dolphin along with a nice tilefish and grouper catch.

About a half hour goes by and we see the mullet on the long-left bait start freaking out.  Then we see the bull coming in hard off from the left.  His big, blunt head was right on the top of the water and he pushed a wake of water as he swam in hard towards the bait.  The angler grabbed the long-left bait and free-spooled to the fish, to let him get the bait down his mouth.  Mullets are long, sometimes difficult to eat baitfish, so it’s important to let them eat it for a while to make sure you get hooked up.  When the time was right, he locked it up into STRIKE and started reeling like mad.  Fish on! 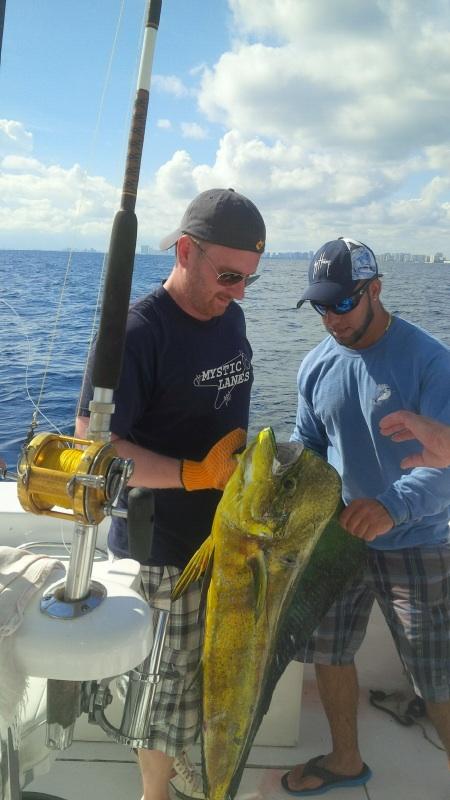 The dolphin started jumping right away and we could see it was a big one.  We fought the fish for over a half hour before actually getting him to the boat.  When the dolphin got close, we kept looking to see if there were any follower dolphin.  A lot of times, a big bull dolphin like this will have a small pack of female cow dolphin with him, which will follow the big bull right up to the boat.  No other dolphin with this one though, he was solo.  Bobby gaffed the fish and we threw him into the cockpit.  We got some good snap shots of the fish all lit-up with his colors.  Nice fish!  We also caught a nice bunch of deepwater tilefish and a grouper during this trip too.  We’re having some great fishing in Fort Lauderdale this week.  Dolphin and sailfish action is good out there, so let’s go fishing!

Sailfish and Dolphin Abundant on the Fort Lauderdale Reef 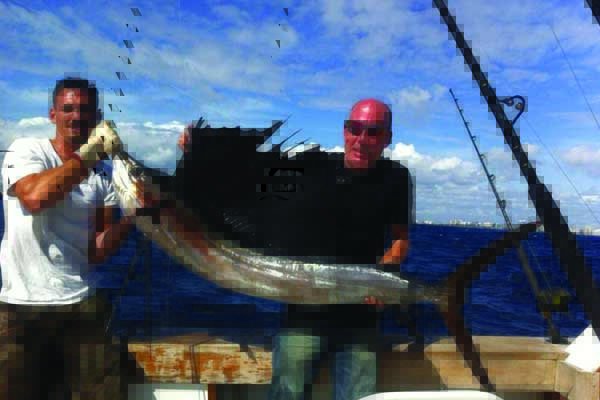 Sailfish caught on a sportfishing charter by Ben Getz

It’s the best time of the year to catch sailfish in Fort Lauderdale.  Every year, sailfish migrate down our coastline and for a couple months, take up residence in our baitfish-laden waters in 100-150ft.  This small stretch of water, just a mile to a mile and a half off our shore, has become affectionately known as “Sailfish Alley”.  The cooler weather gets the sailfish really chummed up.  This sailfish was caught by Ben Getz on a sportfishing charter.  You can see the Ft Lauderdale skyline in the background to see how close to shore we’re fishing. 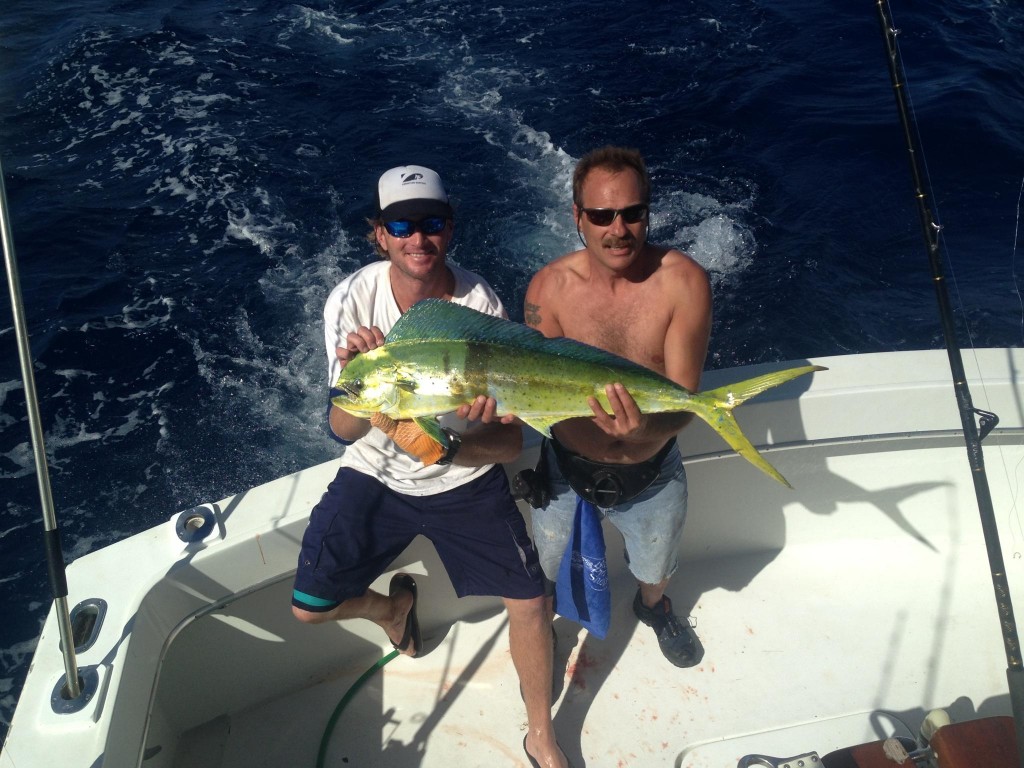 The dolphin are also a main attraction this month.  This is one of the many dolphin we’ve caught over the past few weeks, ranging anywhere from 4 pounds up to 30 pounds.  There are a lot of schoolie dolphin scattered on the reefs right now.  Usually dolphin are an offshore fish, but the strong east winds push them in on the reefs into just 100ft of water.  Dolphin are great eating fish.  The restaurants call them mahi-mahi, the Hawaiian name, for obvious reasons.  Some days are better than others, but we’re averaging 4-6 dolphin per trip on our half day sportfishing charters this week. 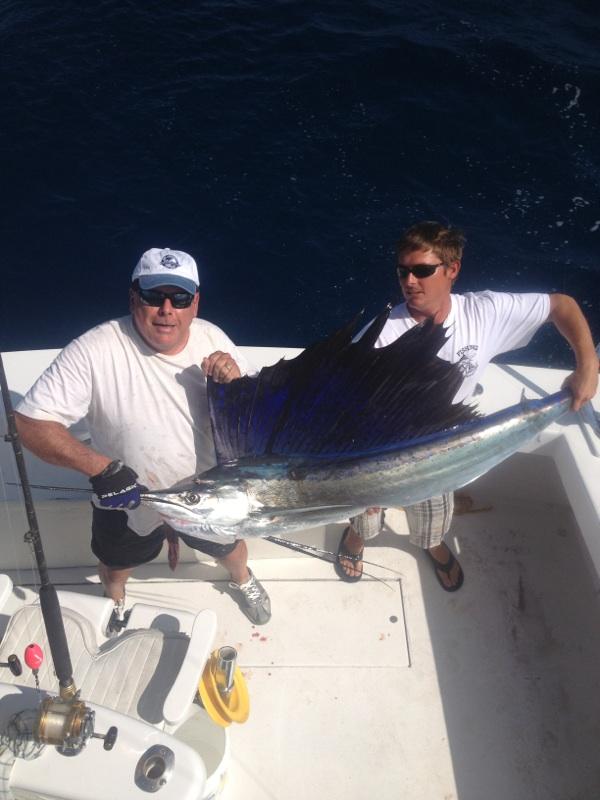 Another big sailfish caught by this lucky angler fishing with Capt. Rod

With the sailfish and dolphin action so good, who could ask for more, but wahoo and tuna are also about and are frequently caught on our charters.  Black fin tunas like to school up, so when you find one, you’re probably in a school of them.  Often, we’ll hook into a single black fin tuna and then every line in our spread suddenly gets eaten and we’re fighting 6 fish at the same time.  Most black fin tunas this time of year are football sized, but we’re catching a couple up to 35 pounds too.  Some big wahoo, 15-35 pounds are out there biting as well.  This is an all-around good season for all our pelagic migratory fish.  It’s a great time of year to come fishing in Fort Lauderdale and catch some awesome game fish. 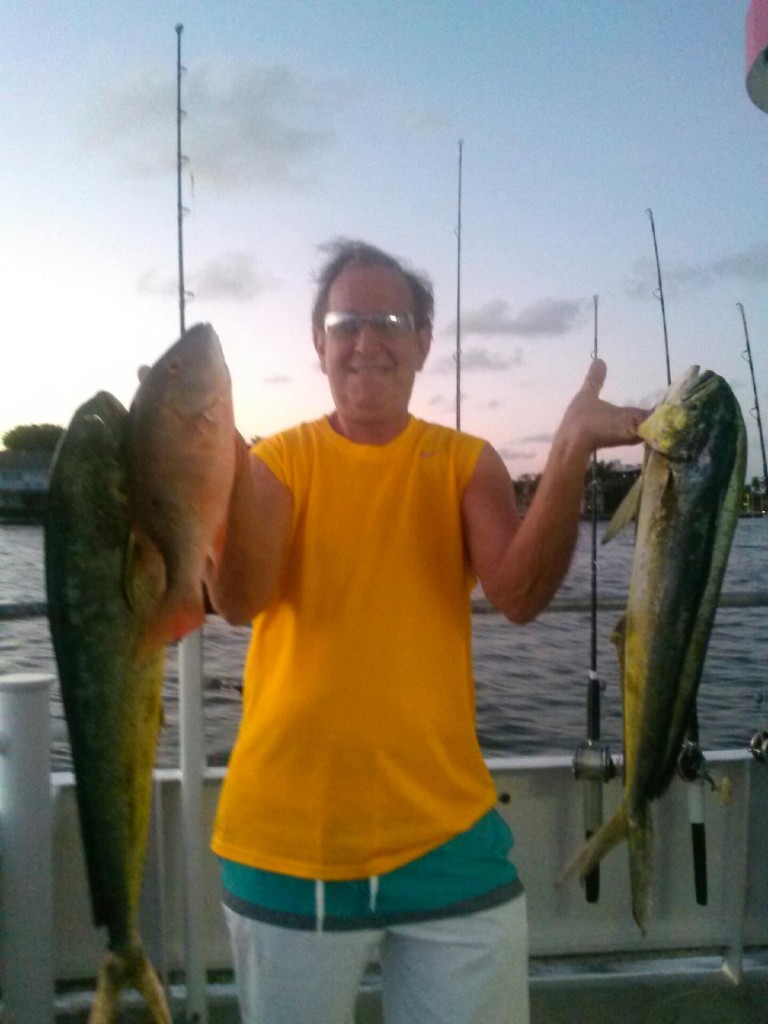 Dolphins and a nice mutton snapper caught on the drift boat, Catch My Drift